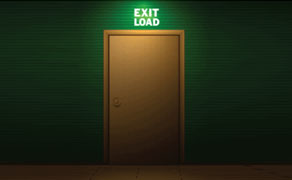 Most equity funds and even debt funds impose exit loads when you redeem your holdings before a certain time frame. Normally, equity funds impose an exit load when you redeem the equity fund before the 1 year holding period. There are some funds that insist on lower holding period and some funds that insist on higher holding periods. The exit load is the reverse of an entry load. As you are aware, the SEBI banned entry loads in 2009 and now mutual funds are required to transparently charge costs through distributors. Similarly, direct funds do not entail any entry cost. On the other hand, exit loads are imposed at the time of early exit. Exit loads may vary from 0.5% to 1% depending on the circumstances.

Remember, exit loads are not only in equity funds but they exist in case of debt funds too. Other than liquid funds which are free of exit loads, even liquid plus funds charge exit load. The reason the fund charges an exit load is that there is a liquidity cost that funds incur to keep some amount of money in liquid format to handle redemption pressures. This cost is indirectly hived off to the customer who is exiting the fund before a certain stipulated time frame. It is also intended to discourage short term investors punting at the cost of long term investors.

As we can see in the case above, the Investor A is actually losing returns to the tune of 133 basis points due to the exit load that is imposed on exit before the 1 year holding period. Hence in this case, the passage of 10 days has made a difference of 133 bps to the yields in case of Investor A. The moral of the story is that you need to factor in exit loads to get a factual picture of your yields.

What about exit loads on equity SIPs..
There is a major misconception on the imposition of exit loads in case of an SIP. You need clarity on another interesting aspect of exit loads here. Let us look at the example below where an investor has been doing an SIP of Rs.10,000 each month on XYZ equity fund for the last 6 months as under..

On May 1st 2017 the investor redeemed all his 7244.11 units as the NAV had touched Rs.15 on that day and he was earning healthy returns on his investment. When the final redemption statement was received, he was in for a shock. On 3666.38 units, he got redemption at the full NAV (these units have been marked in yellow shade). However, on the remaining 3577.73 units, the fund had imposed 1% exit load and reduced the NAV accordingly. The reason is very clear. In case of SIP, the applicability of exit load is calculated from the date of the specific SIP and not the beginning of the SIP program. That is why the first SIPs, which had completed 1 year did not attract exit loads but the balance 4 SIPs did attract exit loads.

Exit loads and STPs..
The concept of exit loads is extremely important in case of systematic transfer plans. The STP is effective as means of converting your lump-sum into an SIP only to the extent that the conversion can be done economically without the impact of exit loads. Hence the STP needs to be structured on the back of liquid funds and other similar funds that do not attract exit loads. Therein lays the trick.

Exit loads are something mutual funds investors need to clearly understand. As illustrated, it does make a big difference to the eventual yield on investment.