10 ways to play the Indian rural theme in stock markets 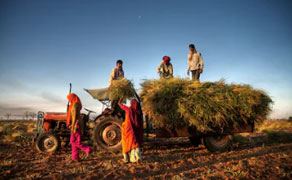 The rural theme in India was always likely to come into prominence after the Gujarat assembly elections. The story of Gujarat was quite clear. While urban Gujarat voted overwhelmingly in favour of the BJP, rural Gujarat was exactly the opposite. The message from rural Gujarat was obviously extrapolated to the whole of India. The message was that if the government did not get its act together in handling farm distress, then it had a tough fight in 2019. The makings of a rural oriented budget, therefore, were always there. So what are these rural theme stocks in India and what are the rural themed stocks to buy?

The Union Budget 2018 did not disappoint on that front. Apart from its commitment to double farm incomes by the year 2022, the budget allocated nearly Rs.13 trillion towards creation of new employment opportunities in rural areas. In addition there was the National Health Scheme that was launched which is likely to cover nearly 10 lakh families to the extent of Rs.5 lakh on a floater basis. The government has also offered an assured MSP on Kharif crops with 50% mark-up as well as a barrage of free electricity and cooking gas connections. The bigger question now is how this could really impact the capital markets and how can one play the rural theme in the stock markets? Let us look at the interplay between rural theme stocks and budget 2018....

10 ways to play the rural theme in stock markets..
1.  The obvious beneficiaries will be farm demand for fertilizers and agrochemicals. With higher rural incomes, greater spending on farms and an assured MSP with a mark-up on the total cost, farmers will now have a greater incentive to invest in these productivity enhancing goods. Fertilizer and agrochemicals manufacturers could be beneficiaries.

2.  The concept of hybrid seeds is just about catching on in India, whereas it has picked up substantially in other countries, including emerging markets. Hybrid seeds are genetically modified to bring about a substantial increase in productivity and farm profitability. This could be the second set of companies to benefit from the rural theme.

3.  With globally competitive cities like Cape Town facing an acute water shortage and India’s own cities like Bengaluru on the verge of a water crisis, there is an urgent to conserve water. The traditional approach of depleting the water table through bore wells cannot work any longer. The answer could lie in drip irrigation. Look out for companies into drip irrigation systems, equipment etc.

4.  Better farm incomes and better rural spending power will mean that there will be greater spending on pipes, implements, tractors, threshers etc. Companies manufacturing these products could also see a pick-up in demand in the future.

5.  Spurt in rural spending will not only benefit a lot of agri-related equipment but also other aspirational products. Look out for greater demand for FMCG products, two wheelers, entry level cars etc. All these are aspirational products for the rural population and could see a distinct rise in demand in the coming months.

6.  Rural housing could be the big theme in the coming months. The government has already laid emphasis on low-cost housing by giving it infrastructure status. Companies that operate in this space with a credible and sustainable business model will be among the names to benefit from this Union Budget.

7.  Rural infrastructure has got a big thrust. India has always been a paradox on this front. The national and state highways constitute less than 5% of the road network in India but transport more than 40% of the goods. The situation needs rectification and the government has already set records in terms of daily road projects. Companies with low debt in the road building business could benefit substantially from this trend.

8.  With the increased spending power of rural India, we could see greater need for financial inclusion among the rural masses. That will bring to the fore need for broader service offerings from NBFCs, especially MFIs. With PSU banks in their own set of problems, the doors may be actually open for the NBFCs and MFIs to expand their rural networks in a big way.

9.  The National Health Plan intends to cover nearly 50 crore individuals across 10 crore families. While the scheme is surely laudable, the big challenge is in delivery. The government may ill-equipped to handle these volumes. That opens up a huge opportunity for companies in the healthcare industry, testing labs, diagnostics business to expand their footprint in rural and semi-urban areas.

Rural India could be the big theme emerging in the next few months. There is a complete platter of stocks that you can leverage to play on this theme.