What is inflation and its Causes 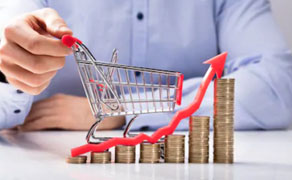 When inflation proceeds over the quality of goods and services, it is well understood that the value of a rupee does not remain constant. You can estimate the real value of a rupee which is nothing but the purchasing power of real tangible goods money can actually buy. For instance, if inflation grows at the rate of 4 % annually, it simply means the cost of salt which was costing at Rupees 12 per pack would now cost you Rupees 12.44 per pack.

It is thus imperative that as the value of inflation rises there is a sharp decline in the purchasing power of goods and services. In advanced or developed economies, the tangible quality of goods and services improve substantially before the prices are increased. The inflation rate, therefore, stays at a marginal rate of 1-2 % per annum. The inflation rate in India stood at 5.88 % during the year 2015. Retail inflation and Consumer Prices Index (CPI) have a significant impact on the overall inflation of the economy.

The definition of 'what is inflation ' is well covered in the detailed definition and description as stated above.
What are the reasons attributed to growing inflation?

Increased demand for goods and services

When the demand for products increases drastically, then prices of the products also increase substantially. When the supply of goods and services falls short of the growing demand, an inflation rate of the economy also increases. Growing inflation in India has been gripping the economy since decades.

Cost-push inflation
When the cost price of raw materials increases, the company 's overheads are also on the rise. Say, for example, the company would have to pay rent while leasing out commercial premises, has to pay salaries to its employees, will have to pay creditors, etc. The establishment expenses and overall cost of raw materials are added to the product 's cost price, allowing the price of products or services to increase. This is otherwise known as cost-push inflation.
These are the two main reasons, for inflation to remain on an increasing trend.

Problems that can arise on account of growing inflation

Creditors lose and debtors stand to gain. The lender leases out loans to greedy borrowers not anticipating a higher rate of inflation. And for the borrowers, this is more like getting an interest-free loan.

Growing inflation brings about a sense of uncertainty about what will happen next. This way, consumers, and companies buy the lesser amount of products and services. Thus growing inflation can lead to a severe hit on the economic output in the long run.

Pensioners and senior citizens who live on a fixed amount of pension they receive from the Govt. can severely be hit, on account of a steep rise in inflation. This way, the life of senior citizens gets affected. They lead a poorer standard of living when things get dearer. Their purchasing power, therefore, comes to a standing halt.

With the steep rise in products of goods and services, the economy is forced to re-price its menus. At hotels, retail showrooms, apparel stores, hardware stores, and departmental super-markets, newer prices have to be updated. Unanticipated growing inflation thus doubles up work of the entire economy.

When inflation rate of growing economies is on a steep rise as compared to other nations of the world, our GDP (Gross Domestic Product) levels become less competitive.

Growing inflation is like demanding higher salaries and wages of employees working in a firm without putting an extra effort in terms of giving output with desired levels of quality or productivity.
We have thus seen several aspects of inflation including causes responsible for the same and problems that can arise on account of increased inflation.

The inflation rate in India is more likely anticipated to decrease on account of several welfare measures and urban development initiatives as propagated by the Modi Government. The economy is definitely progressing on a very good note.