All you should know about Donald Trump 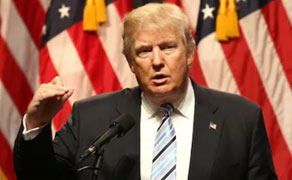 Call him impudent, boisterous or just plain 'yikes', you cannot shift the spotlight from Donald John Trump. Some have labeled his candidacy as an impending doom for America (and the world) but he’s in the race, nonetheless, to becoming the next president of the world's largest economy. And we all need to sit up and take stock.

Donald Trump is a billionaire real estate mogul, an empire he inherited from his father. But his goals were grander. Trump was given control of Elizabeth Trump & Son in 1971 and he renamed it to The Trump Organization. Soon after he moved to Manhattan and built lucrative connections with influential people to take this empire forward. Trump quickly became involved in large building projects in Manhattan that offered opportunities for higher profits, attractive architectural design and greater public recognition. Trump has been the Chairman and President of the Trump Organization since then and the founder of Trump Entertainment Resorts. He ventured into reality TV with The Apprentice that also spawned its offshoot, The Celebrity Apprentice. The hit NBC series got the world latch on to the catchphrase, “You’re fired!”

In 2016 he became the Republican Presidential Nominee.

What does that entail?

America is notorious for its liberal laws on the usage of guns. But where is it heading if Trump becomes the President?
After the devastating Orlando nightclub massacre, Trump suggested that a proposal to limit gun purchases could be on the offing. But he also said that the party goers could’ve been in a better position to defend themselves if they were armed.

What about climate change?
Trump has often disregarded the science behind climate change, even though the entire world is making amends to save the earth. He believes that it’s a hoax that threatens American jobs. He has even boldly stated that he would withdraw from the momentous Paris agreement, currently signed by 195 nations to curb the greenhouse gas emissions. He has promised to stop U.S. funds being spent on the United Nations programs on global warming.

The assumption that Donald Trump will become the president of America cannot be brushed aside. But what will his presidency look like is a bleak scenario. His ambiguous answers on specific public policies and lack of depth on the important issues have left many serious readers frustrated. However, his policy to reject any cuts to Social Security or Medicare, coupled with his promise to increase military spending is a respite to many.

What will his presidency look like?
It seems like the presidency will be run as per Trump’s will and negotiating capacity, as visible in his answers to several questions. In an interview with ABC’s “This Week” about Russian President Vladimir Putin, Trump had this to say, "I have been an extremely successful deal maker. That's what I've done over years, and I know people, because deals are people. And I think I'll get along very well, for the good of our country...I'll get along fine with Putin."

If he does become president, Trump could execute his plan to ban most foreign Muslims from entering the U.S., at least for a while. The president has broad authority over immigration, especially when it concerns national security.

Donald John Trump announced in the beginning of his campaigning that he’s going to build a wall between Mexico and United States, to keep business out of Mexico. This mythical wall may cement the ruin of one of the world’s most cosmopolitan nation with bigotry, hatred and divisiveness. Will America then be great again? We’ll find out on Tuesday, November 8, 2016.