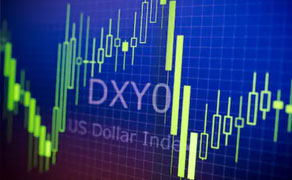 One of the most important barometers for global currencies is the Dollar Index (DXY), which measures the value of the US Dollar versus a basket of global currencies. The basket of currencies essentially consists of nations that have significant trading relationship with the US and are also hard floating currencies.  The original Dollar Index benchmarked the US Dollar against a basket of 10 currencies viz. UK Pound, Japanese Yen, Canadian Dollar, Swedish Kroner, Swiss Franc, West German Mark, French Francs, Dutch Guilders, Italian Lira and the Belgian Franc. However, post 1999 when the Euro was launched as the common currency of EU members, the last five currencies were subsumed into the Euro. Therefore, the DXY basket currently consists of 6 currencies viz. the Euro, UK Pound, Canadian Dollar, Japanese Yen, Swedish Kroner and Swiss Franc. The Dollar Index measures the strength of the US$ versus this 6-currency basket.

How are these currencies weighted?
Each of these 6 currencies is weighted in the proportion of the breadth and depth of their trading relationship of these countries with the US. The chart below captures the weightage assigned to the 6 currencies in the DXY basket

The currency mix that comprises the dollar index currently may not be exactly reflective of the actual trade relationships of the US. The weights were last modified in 1999 post the launch of the Euro and have remained static ever since. However, a lot has changed in the trade equations with the US. For example, China, South Korea and Mexico have all emerged as key trading partners for the US and therefore the Chinese Yuan, Korean Won and the Mexican Peso may warrant an inclusion in the currency basket. At this time, the importance of the Swedish Kroner and the Swiss Franc may be diminishing and the US will have to take call on whether they should still continue in the basket. These changes will most likely be reflected in the currency weights in the near future. Having said that, since the dollar continues to be the predominant currency in world trade, this measure of DXY gives a fairly representative picture of the strength of the dollar

Plotting the Dollar Index (DXY) over the years
To get a perspective view on the Dollar Index, we have plotted the dollar index consistently since the launch of the DXY in 1973 in the aftermath of the collapse of the Breton Woods agreement.

A quick glance at the 44 year chart clearly indicates that the dollar index has gone three distinct cycles over the years. Let us look at the specific cycles and the logic behind each of these cycles

1.  The first major up-cycle began around 1980 when the world economy was getting out of one of the most tempestuous geopolitical decades of the 1970s. The year 1980 also saw the price of gold peaking and resuming a downward trend. Normally, gold and dollar are inversely correlated and the rise of the dollar index began exactly around the time the Gold chart peaked out. Between 1980 and 1985, the Dollar index was up by over 50% as the Latin American economies started defaulting on their dollar debt. As the currencies of the Latin American economies crashed, the US dollar went into a bull rally. At the same time, the new Fed chief, Paul Volcker who had taken over in 1979 decided to make monetary policy the fulcrum of economic growth. Of course over the next 10 years as the Latin problem got gradually resolved, the US dollar almost came back to where it had started from.

3.  The last phase of the Dollar Index rally began around 2011-12. This rally was driven by two key factors. By 2011, most of the Southern European economies were in deep trouble due to excess borrowing. Since all these economies were part of the Euro, they had to be bailed which resulted in the weakening of the Euro and a strengthening of the dollar. Secondly, the US Fed had first mentioned about tapering their bond purchases in 2013 and commenced rate hikes in 2015. Later in 2016, the Trump trade also resulted in the strengthening of the US Dollar, though some of his lofty promises are now gradually coming into question.

The Dollar being the central currency for global trade and commerce becomes an important barometer for global economies. Even for the INR, there is an exact inverse relationship between the dollar index (DXY) and the strength of the INR.