Economic implications of the Modi-Trump meet 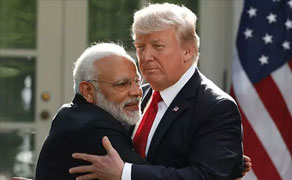 The US based Brookings Institute very aptly laid out the broad agenda and the tone for the Modi – Trump meet a day before the actual meet. As the Brookings Institute observed, “Handling Trump may be a different ball game compared to Barrack Obama, as Trump has a much sharper nose for the business deal”. The moral of the story was that the discussion will have to dwell purely on the business aspect of the relationship. The Brookings Institute had identified the following key factors that should constitute the narrative of Mr. Modi when he met up with Donald Trump.

Gist of what the Modi Narrative must be

Firstly, the personal equation between Trump and Modi will be extremely critical for the sustenance of the relationship. For example, there are examples like Angela Merkel of Germany and Macron of France who have shared a cold relationship with Trump from the beginning.

Brookings feels that India needs to highlight the important contribution that India is making to the US economy in terms of creation of jobs, demand for US products, large defence orders, quality workforce & entrepreneurs contributing to the progress of US etc.

Lastly, Brookings also feels that Mr. Modi may have to take the lead in helping the Indian private sector and Indian business catalyze the formation of a positive opinion about India and her positive contribution to the US economy over a consistent period of time.

What were the key takeaways from the Trump – Modi meet in the US?

On the subject of trade surplus, the issue was hardly a bone of contention beyond a casual mention by the US president. At a more practical level, India’s trade surplus with the US stands at $25 billion which is a fraction of the trade surplus of $350 billion that China runs with the US. While the US may look at ways and means of pursuing this matter, it is unlikely to really crop up in a very big way considering that it is a very small component in the overall US trade scheme of things.

The meet has stayed away from discussing on the subject of H1-B visas at great length and rightly so! The US, anyways, has decided to ban H1-B visas for anybody with less than 4 years experience. The good news is that even the Indian IT companies are not overly worried about it. In fact, Infosys and TCS have already taken the lead in adding to their American workforce and rely more on automation for routine tasks across geographies. That should placate Trump for now and it is appropriate that Modi has left the issue at that. More importantly, the ban of visas may be a tipping point for the Indian IT sector to catalyze itself.

The big characteristic that is common to India and the US is the fairly rigid red tape and the investment restrictions in both the countries. To the credit of Trump and Modi, both have dwelt at length on cutting the red tape and also to ease the investment climate. In fact, American investors have been complaining to Trump that there were too many restrictions on investing in India. This assurance from Modi should not only placate the US businesses but also give Trump the confidence to move ahead in its cooperation with India.

From defence orders point of view, Trump has reasons to celebrate. The outcome of the first meeting between the two state heads is likely to result in billions of dollars worth of orders for US arms, fighter jets and ammunitions. This is apart from a multi-billion dollar order for drones through which India proposes to improve their vigilance and monitoring along the Pakistan and Chinese borders. This is an area that the US is looking to expand. This will not only add to India’s strategic arsenal but also keep the US happy by helping them check their trade deficit with India.

Being the first meeting, there have not been too many commitments between the US and India on joint drills, joint patrolling of the Eastern Seas and joint manoeuvres. However, both the countries have agreed, in principle, to take this joint cooperation to a much higher plane. This informal agreement has been timed at the precise point of time by the Modi government. Currently, China is trying to flex its muscles along the Indo-Bhutan border and is also giving expansionist signals in the South China Sea. China has also been giving indications of supporting Pakistan to the detriment of India’s interests. Being surrounded by hostile neighbours has larger economic, strategic, geopolitical and trade implications for India and this meeting should act as a key counterweight to such Chinese ambitions.

In a nutshell, the first meeting between Modi and Trump has been critical from the point of view of setting a long term agenda. India had to counter balance the efforts of China and also protect the interests of Indian industry and exporters. It must be said that for a level-1 meeting it surely appears to have hit the nail on the head!