How the balance between spending and saving determines long term wealth? 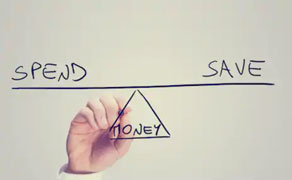 The legendary Warren Buffett rightly summed up, “Do not save what is left after spending. Instead, spend that is left after saving”. This defines the basic approach to saving. It is all about how to balance spending and saving. This balance between saving and spending is at the core of wealth creation. Most people look at their saving capacity as under:

So the savings actually becomes a residual item. After all the expenses are met (on necessary and unnecessary items), the balance left is saving. That way, you will never be able to save anything substantial. Your approach should be the other way round.

What the above equation means is that you need to treat expenses as the residual item not savings. After your target savings are met out of your income you need to plan your spending. That is the first and most reliable method of creating wealth.

But why are savings so important?
Savings are the funnel that eventually feed into your investment. When you save a certain sum of money each month, you now have a choice what to do with the money. Of course, you will stash away some money for a rainy day (that can be equivalent to 6 months income). Once that is taken care of, you need to start investing with the future in mind. The importance of savings stems from 3 factors. Here are some tips to manage your money wisely..

The earlier you start saving, the longer you stay invested and therefore the power of compounding really works in your favour

A small increase in savings capacity can make a difference to the eventual wealth. We will look at this point in greater detail

Savings are all about discipline and this discipline forms the basis of investing too. The more discipline you maintain in savings, it helps long term wealth creation.

Balancing saving and spending and the impact on long term wealth

If you look in your family or among your friends, you will find that people with the same levels of income achieve vastly different levels of wealth over time. In India, we normally attribute wealth to luck or the good fortune bestowed by Goddess of Wealth. Actually, creating wealth over the long term is a lot more boring and a lot more about discipline. Let us assume that 3 friends (Tom, Dick and Harry) start their careers at the same time. Since all of them are professionally qualified, their packages are also approximately the same. You will be surprised how the saving habit among the three friends makes a vast difference to their wealth creation over the next 25 years.

Tom has done two things which are absolutely against the basic tenets of wealth creation. Firstly, Tom has not bothered to stretch his savings. He has actually adopted the method of spending first and then just saving the balance. Secondly, Tom has wasted the 25 years time period that he has by putting the money in a conservative liquid fund. He has taken on the big risk of not taking any risk and that is the reason he has ended up worse off at the end of 25 years.

Dick has surely done better than Tom as is evident from the wealth that he has created at the end of 25 years. Also, he has made an attempt to squeeze more savings out of his income and has achieved this wealth despite starting off at a lower level of income compared to Tom. Where Dick went wrong was in structuring a static SIP through his 25 years. Ideally, over time your income levels increase and so does your capacity to save. By keeping his SIP static over 25 years, Dick has not made the best of his increasing income graph.

Case of Harry:
How did Harry, despite starting off with the lowest income, manage to create such humongous wealth? Actually, Harry has got both the basic tenets of long term investing bang on target. Firstly, he has managed to squeeze the maximum out of his income compared to Tom and Dick. Also, Harry has gone a step ahead by making his SIP into a step-up SIP. This has ensured that his investments have growth and at the same time he has also managed to squeeze more savings each year out of his additional income. That explains why Harry has performed the best among the three friends.
There is a popular saying in wealth creation that, “It is not where you start, but where you end up that matters”. Harry has really ended up the happiest because he could really squeeze the maximum savings out of his income. That is why balancing savings with spending is so critical to wealth creation.