Is low inflation a signal for RBI to cut rates? 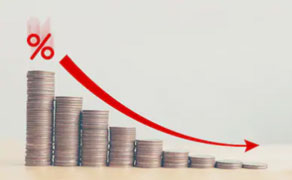 The sharp fall in the inflation rate has been largely led by food inflation which constitutes nearly 50% of the overall CPI inflation. With the combination of tepid IIP growth and consistently lower inflation, the question is whether it can be construed as a signal for the RBI to cut rates? The following factors will determine the trajectory of the RBI..

1.  Will food inflation stay low during the year?
The sharp fall in food inflation has been driven by two factors viz. higher output and limited exports. Additionally, the strong rupee also made imports cheaper and that also led to a glut in the economy. Things could change for two reasons. Firstly, the government has already increased the MSP of paddy and pulses and that is likely to increase the food inflation. Secondly, the government is likely to encourage exports of pulses this year, which could further increase the price of pulses in India. Also, the imports could become costlier due to a slightly weaker rupee. Food inflation could be trending at a slightly higher plane this year.

3.  What happens to the value of the rupee?
The value of the INR plays a very important role in determining the extent of imported inflation. Normally, a weaker rupee tends to make imports costlier and results in imported inflation. For example, India imports nearly 80% of its oil requirements and that means any weakening of the INR will lead to importing oil inflation from other countries. While the INR could show signs of weakness from the current level of 64.5/$, any major depreciation of the INR looks unlikely as capital flows in India are likely to remain robust. Thus, imported inflation is likely to remain subdued for the year.

4.  Global cues will matter for the RBI..
Global cues in the form of Fed rates and Fed taper as well as the action of other central banks will matter to the RBI when it takes a decision on rates. The Fed rate was hiked by 25 bps in June and is likely to be hiked by another 100 bps by the end of 2018, as per the Fed guidance. The Fed rates are critical because FPI flows into Indian debt depend on the rate differential between the US benchmark and the Indian benchmark. If the rate compresses beyond a point and the INR stays volatile, it results in a risk-off trade wherein FPIs will sell out of Indian markets and buy into safer global markets. To avoid this scenario, the RBI may prefer to maintain the rate differential. Additionally, the Fed decision to taper will also matter. Taper entails reduction in the bond portfolio of the Fed and that could create a liquidity crunch in markets. However, taper could also mean that US yields could go up and hence the Fed may choose to go slow on rate hikes. All these factors will be critical in determining the RBI rate path.

5.  What justifies the shift in stance?
The big question that the RBI needs to address is, "What justifies a shift in stance"? Back in the February policy, the RBI had changed the stance of monetary policy from Accommodative to Neutral. In the April policy, the RBI governor had even warned the markets to be prepared for a rate hike if required. The big challenge for the RBI will be to decide whether the situation will justify a reversal in the stance. Normally, the central bank does not change its stance unless there is a very strong justification. That could either come from a structural shift in inflation or a major change in the stance of the Fed.

Considering the recent rise in the MSP for paddy and pulses and the uncertainty over the spread of rainfall this year, the RBI may prefer to wait and watch for now. The low growth in IIP may be a justification but the core problem is that credit demand is not picking up or banks are not in a position to lend. Neither of these situations can be rectified by a rate cut. But above all, the key challenge will be the very volatile global scenario. The RBI may decide to wait and watch all these data points and probably take a rate decision in its October policy. How the RBI deals with its monetary stance in the August policy may hold the key!