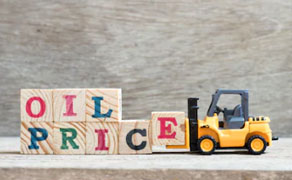 As the Brent crude crosses the level of $70/bbl briefly, it has been one of the sharpest rises in oil prices in the last 3 years. There are some basic crude oil signal providers that give out crude oil buy sell signals. In fact, the price of Brent crude has already touched a 3-year high as is depicted by the chart below..


Since the price of crude started correcting in November 2014, the downtrend continued till January 2016 when crude oil touched a low of $35/bbl. From the lows of $35/bbl in January 2016, the price of Brent Crude has doubled to $70 by January 2018. That is a return of 100% in 2 years implying CAGR returns of 36% annualized over the last 2 years. This makes crude one of the best performing asset classes in the world (we are not yet considering Bitcoins). So what have been the triggers for this sharp rise in oil prices and is a further uptrend in oil possible in 2018? Here are 5 Best oil trading signals.

OPEC quota appears to have worked well..
January 2018 also marks the first anniversary of the OPEC quotas. At the OPEC meeting in November 2016, the OPEC members as well as some friendly oil-rich countries like Russia and Mexico decided to restrict the output of oil. There has been a daily output cut of 1.8 million barrels and that cut has been sustained. In fact, the latest OPEC reports confirm that the compliance by the OPEC member countries has been unquestionable. This reduction of 1.8 million barrels in the market on a daily basis has literally shifted the demand/supply equation in favour of demand. The glut is now over and despite a surge in production in US shale; it has not been able to reverse the impact of this 1.8 million/bbl daily output cut. Already OPEC and Russia have pledged to continue the output cut till the end of 2018.

There has been a genuine pick-up in demand for crude oil..
The last one year has seen a genuine pick-up in the demand for crude oil. Firstly, the overall commodity cycle has gone through an upturn in the last 1 year with Chinese demand spurring a sharp rally in copper, zinc, aluminium and steel. Oil has also followed the trend as the chart depicts.

It is obvious that the price of Brent Crude has appreciated by 55% in the last 6 months itself. While the supply cut has been a factor, demand has been driven by 2 key factors. Firstly, refining spreads have improved across the world and that has created a huge demand for crude oil as refineries are now working overtime. Secondly, a recovery in global growth is a good portent for oil demand. The better than expected growth rates in EU and Japan, green-shoots from China have contributed to greater crude oil demand. In addition, the market is also betting heavily that the massive US tax cuts and the proposed infrastructure spending will spur demand for crude oil.

Why US shale production may not keep pace?
The big fear when the OPEC promised to cut supply was that US shale supply would come in and disrupt the demand / supply game. The US shale supply was highly flexible and could come into the market at short notice. But crude oil prices are already up by 55% and there is really not tangible threat from US shale. There is a specific reason for this. Look at the chart below..

If you are wondering how the US 10-year bond chart is relevant, let us get back to the history of Shale. Since 2010, the shale capacity was enhanced because funds were available at virtually zero-cost as the Fed had kept the rates near zero. Since then, the Fed has already hiked rates by 125 basis points from (0.00%-0.25% in Dec 2015) to (1.25%-1.50% in Dec 2017). The Fed is expected to hike rates by another 100 bps in 2018. The bond yields are also reflective of the cost of borrowing and as debt becomes expensive shale will become less viable. That explains why the US shale has not been able to push supply. That has resulted in the US drawing down on inventories and lower inventory reports put further upward pressure on crude oil prices.

Supply disruption from Iran and Libya
Geopolitical risk is back in a big way. The disruption of supply from Libya, the socioeconomic crisis in Venezuela and the renewed threats of US sanctions on Iran have all served to elevate the geopolitical risks. This supply disruption is a key concern that could keep prices higher in the year 2018. Of course, the age-old tiff between Saudi Arabia and Iran is becoming more evident in the latest theatre of war called Qatar. Any deterioration could disrupt oil supplies from the Strait of Hormuz which is a key oil route.

Option bets on the crude options market in 2018
So where exactly is oil headed in 2018? With the OPEC sustaining supply cuts and US shale unable to keep pace, the prices should remain buoyant. There is also the threat of increasing demand for oil from end consumers and from refiners. If you look at the options open interest, the maximum open interest is accumulated in the $100 option expiring in the month of December 2018. That clearly indicates that even oil traders are betting on substantial upsides in oil prices in 2018.