Make in India to have positive effects on Indian equity markets 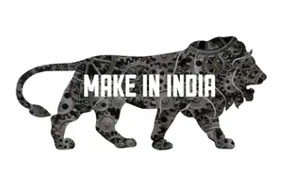 So this is how investment works: we invest our hard earned monies in shares of companies that we believe to be trustworthy and profitable. Now that alone doesn't motivate a company to create more profitable business(es) for its stockholders, including you – the investor. There are several other factors that play an integral part in making a business/company a profitable one:

Skilled labour for executing various processes in the supply chain

Excellent distribution network within and outside the country

Now, all of the above can be made available at the right place, at the right time only when the market sentiments are high and favourable for businesses. Which is what Prime Minister Narendra Modi’s Make in India initiative primarily wants to achieve.

What is the Make in India initiative?

Our Prime Minister launched the Make in India initiative on 25th Sep, 2015 with the primary objective of turning India into a global manufacturing hub, by encouraging both multinational and domestic companies to manufacture their products within the country. The initiative aims to increase the manufacturing sector’s contribution to the GDP from the current 16% to 25% by the year 2015. To this effect, Make in India has devised multiple initiatives, is promoting FDI, implementing IPR and developing the manufacturing sector for the purpose of creating more business opportunities, as well as employment.

The Make in India campaign rests on 4 pillars

1. New processes: steps are being taken to improve market conditions by doing away with archaic policies and regulations. The government is introducing several reforms for getting FDI and fostering business partnerships. This should help the government in improving the country’s ‘Ease of Doing Business” index, which is closely monitored by the World Bank.
2. New infrastructure: The government is developing industrial corridors, and smart cities that’ll offer advanced technology and high-speed communication – both integral to the growth of any business. Innovation and research are being supported with improved infrastructure for IPR registrations.  Skilled workforce for various sectors is also being created.
3. New sectors: Make in India is promoting 25 sectors, with detailed information on each being shared through the initiative’s interactive web-portal.
4. New thinking: Make in India aims to change the government from being a regulator to a facilitator. The government is keen on partnering with the corporate sector in the economic development of the country.

The initiative has tasted success in a very short period of time. Companies, both international and domestic, have announced new manufacturing units in different parts of the country. Japan has shown active interest in investing in Make in India related projects. There are encouraging signs that Make in India is positively impacting generation of jobs. It’s estimated that 7.2 lakh temporary jobs are likely to be created in the next one year. As far as the economy is concerned, equity inflows of $56 billion were received for the period October 2014 to March 2016.

Effect of Make in India on the Indian equity markets

Equity markets have seen a steady rise in the last 3 years with the benchmark indices hitting new highs – Sensex has gained 31.3%, and Nifty has gained 35.2%. Indian households are increasingly investing more monies in equities and debentures. It jumped from ~39 crore to ~92 crore in 2015-16.  FII invested INR 1.11 lakh crore in the equity market between 2014-15, as compared to INR 79 crore in 2013-14. These indicators pinpoint at the remarkable pace of approvals and investors’ confidence in the country.

From an investment point of view, here are the sectors that look to gain the most from the Make in India initiative:

Infrastructure: the more money a country makes, the better its infrastructure gets over a short period of time.  So as India’s economy picks up, capital goods, power, IT and infrastructure sector including cement are slated to benefit.
Banking: as Make in India turns India into a manufacturing hub, banking will play a pivotal role in facilitating finance and working capital to industries. Needless to say, a sizeable chunk of investments are likely to flow into this sector.
Railways: Make in India aims to improve this sector using the Public Private Partnership model. The focus areas are sanitation, gauge conversation, doubling, safety upgradation, port connectivity etc. Thus, railways and related companies will be a focus of interest for investors.
Defence: to facilitate the entry of international players in this field, GoI has withdrawn excise and custom duty exemptions. Thus, major international defence production companies are taking active interest in investing in this sector.

All in all, it is good news for investors with varying appetites for risk. The market has never seemed so promising in the past, so start looking towards a brighter future.