Open an Account
Outlook For Samvat 2075 |Blog by Siddhartha Khemka 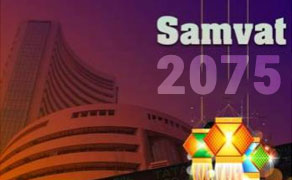 Equity markets had a historical journey in Samvat 2074, touching its all-time highs during this period. While the Samvat started on a strong note, later issues like imposition of LTCG tax, PNB scam, geo-political issues followed by rise in global interest rates led to market meltdown. Despite the sharp fall in mid and small caps, large caps continued their dream run with Nifty touching its all-time high of 11,760 in August 2018, backed by strong domestic flows and favorable macroeconomic data.

India’s GDP grew 8.2% YoY in 1QFY19, from 7.7% in the previous quarter (4QFY18) – this was the fastest pace of growth in more than 2 years. In CY18, while FII/FPIs have sold domestic equities to the tune of INR420bn (at the end of Oct'18), MFs have been consistent buyers of Indian Equities and have pumped in ~INR1.04tn so far (one of the highest ever in a year).

However, the last two months have seen sharp increase in market volatility with the Nifty falling off by 12% from its peak on fear of global trade war tensions between two giant economies US and China, series of rate hikes by US FED, strengthening of dollar, rising crude, debt market liquidity crisis and IL&FS issue. The Rupee too has depreciated over 14% in FY19.

As we enter into Samvat 2075, many uncertainties about FII selling, trade war tension, state election events, bloating INR, worry of rising twin deficits and Lok Sabha election in 2019 etc. are likely to paint a bearish picture for the markets. On the other hand factors such as GDP growth, stabilized GST collection, hike in MSPs, rising rural income and in turn rural consumption, rising revenue receipts would make a strong investment case in Indian equity markets.

However, markets are likely to remain volatile amid an environment of challenging macros, potential slowdown in domestic equity flows and a busy political calendar. Hence we would suggest Investors to adopt a staggered investment strategy in equities to lower their risk in such volatile and uncertain market condition.

While there are some macro headwinds, the picture on micros is looking brighter. For the first time in many years - the Nifty earning growth is likely to be in double digit territory. This along with healthy growth in the underlying consumption demand should keep the overall market resilient.