There is a difference between income and wealth 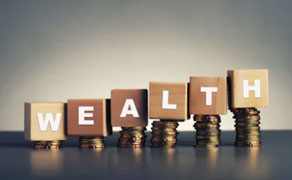 Most of us have seen the Hollywood classic, "Wizard of Oz" and few can forget the extremely pretty girl played famously by Judy Garland. If you are fond of Western music it is likely that you love listening to Marvin Gaye and Michael Jackson. Do you know the similarity between all of them? They were all among the highest earning artistes of their time. Ironically, all of them died almost penniless. How is it possible that someone with such stupendous income levels could die penniless? That is because, despite being incredibly gifted artistes, most of them did not understand the difference between income and wealth.

Income can be generated by your skills but wealth can only be generated with determination, passion and patience. You need to take a futuristic view of money and plan to create wealth. That is the only sure-shot way to convert your income into wealth. You can argue that stars succumb to the lure of the camera and are unable to reconcile with a hostile real world. But this problem is not just about stars. Even celebrated writers and novelists like Oscar Wilde and Edgar Allen Poe died in penury. To understand why this happens, let us understand the difference between income and wealth. In the debate of income versus wealth what you need to understand that converting income into wealth is entirely in your hands and it is actually quite simple. Let us start off with the relationship between income and wealth..

Understanding the relationship between income and wealth..
Let us take the case of 4 friends, A, B, C and D who are earning Rs.50,000 per month. For simplicity let us not worry about income increases but the idea here is to purely look at the power of converting your savings into wealth

In the above example if you see all the four friends are at the same level of income. However, over a 20 year period, Friend A creates a wealth ratio of just 1.53X while Friend D creates a wealth ratio of 9.75X. Why this vast disparity in wealth creation ratio despite the income levels being the same in all the four cases. That is where the difference between income and wealth comes in. If you look at the table closely, there are 3 corollaries that you can draw about converting your income into wealth.

The second step boils down to how you deploy the money. To earn income you work hard and to convert this income into wealth, you need to make the money work hard for you. Friend A and B have allocated their money to a savings account and to a bank FD. With low levels of returns, they have struggled to create wealth over a longer period. Friends C and D have used the power of equities better to convert income into wealth.

Did you notice the irony? Friend D saved less than Friend C on a monthly basis but he has looked at returns on a post tax basis. One of the major reasons people do not convert income into wealth is due to the impact of taxes. Friend D has opted for the ELSS fund instead of the equity fund and the tax benefit has enhanced his effective returns. Therefore, despite his lower monthly savings, Friend D has a wealth ratio of 9.75X against 5.49X for Friend C.

By now it is clear that to convert income into wealth you need to make money work much harder for you. That is about being disciplined and also taking calculated risks. Five key points emanate from this discussion on income versus wealth..

1.  Income is a flow and wealth is a stock. The more disciplined you are and the more calculated risks you take in equities, the more wealth you are likely to generate over a long over a longer time frame.

2.  Income will last you only as long as your working life lasts. In fact, the working life for artists is much shorter and hence the need for them to convert income into wealth is much higher.

3.  Income can be enhanced by working harder and working smarter but income alone cannot make you wealthy. For converting income into wealth you need to make sure that money works much harder for you.

4.  Don’t forget the impact of taxes. At 30%, Indian taxes are a major impediment to wealth creation. You need to use the tax breaks and tax efficiencies if you really want to convert your income into wealth.

5.  Lastly, income is active and wealth is passive. When it comes to creating wealth the smart person identifies the simplest path to riches. Unlike income, wealth is not the exchange of your skills or services for money. It is the exchange of money for risk adjusted returns. That probably sums it up!