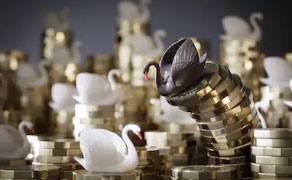 The concept of a Black Swan was first put forward by noted writer Nassim Nicholas Taleb in his celebrated book, "Black Swan". Essentially, a black swan is a rare occurrence since swans are normally white in colour. Black swan is normally used to represent events that are random and highly unlikely. But when these events strike, they have massive and long-lasting consequences.

Since black swan events are random in nature, they are hard to predict; both in the timing and the magnitude of the event. Black swans in the stock market have struck in a variety of ways. For global markets, the tech bust of 2000 and the sub-prime crisis of 2008 were hard to predict. For example it was almost hard to predict that marquee companies like Enron, Bear Stearns and Lehman Brothers could go bankrupt. But that is exactly what happened! Let us look at some of the key Black Swan events in the past..

Major Black Swan events in the past..

The Wall Street crash of 1929 was the first major black swan event in recorded history. It not only pushed the US into a prolonged recession lasting for over 10 years but spread to other countries as well. For example, the hyper inflation in Germany in the early 1930s, the rise of Nazi Hitler and eventually World War II were all an outcome of the US recession.

Black swans are not always negative but can be substantially positive too. India’s decision to open up the economy in 1991 in a big way was again a Black Swan event. If you had surveyed analysts and economists at random back then, nobody would have given much of a chance for large scale liberalization. Liberalization in 1991 was a major game changer as it created tremendous value for the Indian economy and the Indian markets over the next 25 years.

Take the case of the mass popularization of the internet in 1995. For the first time, the internet was actually made available to the people at large. Over the last 20 years, the value created by the internet probably runs into trillions of dollars. At that point of time it was hard to predict that the impact would be so huge and so long lasting.

Ironically, the rise of the internet and connectivity created the next big Black Swan event in 2000 when the technology meltdown started. Back in 1999 Cisco had a market capitalization of over $600 billion. The story of the convergence of technology, business, media and telecom was playing out in a big way. But the problem was that billions of dollars were invested assuming that these sectors will have pricing power. What happened was exactly the opposite, leading the model to crumble.

The most recent Black swan event happened in 2007 when the sub-prime crisis unfolded. The entire rally in assets was predicated on the fact that real estate prices would only keep going higher and hence real estate could be leveraged like an ATM. The problems started when the real estate cycle reversed. By then almost every large banker, broker and insurer was inexorably locked into real estate prices. When the bust came in the form of Lehman, it was almost a global contagion.

Could there be Black Swans in 2018?
As mentioned earlier, black swans are random and can come from the most unlikely places. There are at least 3 possible black swan scenarios that are being put out right now. Firstly, break-up of the European Union is a distinct possibly. Many economies could be battered by the impact of shifting to individual currencies. With basket cases like Greece and Spain, that is a distinct possibility. Secondly, the black swan could come from the monetary system if large central banks adopt a policy of rate and liquidity tightening. We have seen indications from the US and UK and others could follow suit. The liquidity shock could be much bigger than anticipated. Lastly, a currency war is another Black Swan possibility as more countries try to weaken their currencies deliberately to export their way to growth. China tried in a small way in 2015 and the impact was disastrous. You can just imagine what would happen if China went for a large devaluation.

Creating a black swan investing strategy..
For starters, it is called black swan because it is hard to predict. So create an investment strategy is prima facie difficult. When black swans become predictable they become white swans. But here are 2 ideas on how to hedge against black swans..

Stick to your allocation plan that automatically switches your asset mix based on parameters like valuations, interest rate expectations etc. This will force a sense of discipline into your investment strategy as you are unlikely to be caught on the wrong foot holding on to assets at highly inflation prices.

Black swans do tend to occur in markets at regular intervals. You never know what the next black swan event could be. Better to err on the side of caution!