Understanding the concept of economic moat in evaluating stocks 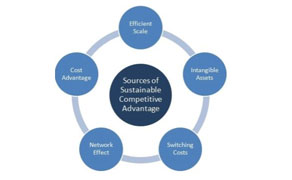 The concept of an Economic Moat was first popularized by Warren Buffett. An economic moat represents some unique competitive advantage that a company enjoys that is likely to sustain growth, profit margins and market share for a long time to come. But what is moat in stocks? When it comes to stock market investing, smart investors look at the concept of Wide Economic Moat. In fact, wide economic moat is a measure of how real and how sustainable is your competitive edge as a business. Normally, a business with a wide economic moat tends to get a better valuation in the stock markets. To understand what is a moat in stocks, one needs to first understand the type of moats that a business can create.

The strength of an unparalleled network..

A network is hard to define but it essentially represents a matrix of various levels of business that serve to enhance one another. Take the case of Bharti Airtel which has been able to hold valuations despite the competition from Reliance Jio. In the FMCG space, ITC and Hindustan Unilever have created an unparalleled network which will require long years and huge investments to replicate. That is the reason why both ITC and HUVR have dominated the FMCG space for a long time. At a global level just think of the wide economic moat that Facebook has created in the last 10 years. It is almost impossible to replicate its 2 billion customer base, not to mention the social impact of constant social interaction.

Advantages which are not exactly tangible..

To understand what is a moat you need to look at the advantages that are not tangible. Plant and machinery is never an entry barrier. But how do you replicate the goodwill and brands that companies like Hindustan Unilever or Nestle or Britannia have built over the years. The reason the Indian Pharma industry is currently facing a crisis is that it never created intellectual property that could have given it an intangible advantage. That is why valuations are trending to commodity levels.

Unmatched cost advantages..
This can be actually quite transient as cost advantages can be replicated. In the past, India had a cost advantage in textiles which it subsequently lost to countries like Vietnam and Bangladesh. However, China has managed this economic moat much better. Today, China is able to produce most metals and heavy equipment at a cost which other countries are just not able to compete with. To an extent, the advantage for China comes from the incredible scale that its factories operate in. More than the low costs, it is the scale that is going to be hard to replicate. In fact, Indian IT and Pharma actually grew on the back of this economic moat for all these years.

How to inflict a huge switching cost..

This may appear to be a rather transient advantage but many companies have really built a sustainable business model around it. Take the case of Microsoft. The Operating System is a fairly simple product but over the last 40 years there is so much that people have invested in running this O/S that they do not see any merit in shifting. For any individual or company looking to shift out of the Microsoft O/S, the related costs are just too high. In fact, software companies in India used this moat quite effectively over the years as their engagement with clients kept on expanding leaving little incentive for them to switch.

If you have control over the raw material supply and the final demand for your products then you can exercise tremendous control over the market. A classic example is how RIL has done that in the hydrocarbons space. By creating a seamless chain extending from oil exploration, gas exploration, oil refining, oil marketing and petrochemicals it has created cost and revenue advantages that are hard to beat. That explains why RIL enjoys the kind of GRMs that others find it hard to achieve. That is a very important moat for investments.

There are myriad cases of moat stocks in India. Reliance has used its end-to-end integration to create a unique advantage. Similarly, Maruti has created a moat in the consumer auto space by its ability to consistently bring new models into the market and cater to almost every segment. On a much smaller scale, companies like Shriram Group have created a wide moat with their unmatched distribution and customer interface across India. D-Mart has created a special moat by taking retailing to the mass market with a cost structure that is hard to match.

Finally, remember that there is another aspect of a wide economic moat which has to do with ability to be ahead of the curve. Amazon was created by being ahead of the market in every business; be it online shopping, Kindles, Cloud or even drones. Similarly, Google has constantly innovated to produce multiple winners including the search engine and the Android platform. Then there are companies like 3M which ensure that each year nearly 25% of their revenues come from products introduced in the last 3 years.

Typically moat stocks command very fancy valuations in the market and consistently earn ROCE that is more than the cost of capital. That is the crux of Wide Economic Moat Stocks.