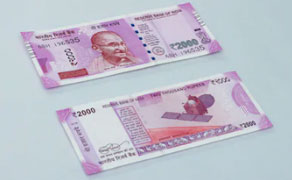 After our Prime Minister Narendra Modi announced the ban on Rs. 500 and Rs. 1000 currency notes, the Reserve Bank of India has issued currency notes of Rs. 2000 denomination. RBI will release two sets of Rs. 2000 notes, one that would have the insert letter “R” and another set without the insert letter. Both these currencies would be a legal tender.

The new Rs 2000 currency note that will be issued will have the signature of Urjit Patel, the RBI governor. The year of printing of this currency note would be 2016 which would be printed on the reverse side of the bank note. The new note will have a magenta base colour and the motif of Mangalayan on the backside. This motif is included to depict the country’s venture to the interplanetary space. The new banknote also has other designs and geometric patterns that are aligned with the overall colour scheme.

Salient Features on the Obverse (Front of the banknote)

The new Rs 2000 currency note would have a see through register with the denominational numeral 2000.

The note also includes a latent image with the denominational numeral 2000.

The note would have the denominational numeral 2000 written in Devnagari.

The new currency will include the portrait of Mahatma Gandhi in the centre.

The bank note will also have the micro letters of “RBI” and “2000” on the left side.

A windowed security thread with the inscription of “BHARAT”, RBI and 2000 included with the colour shift. This means that the colour of the thread changes from green colour to blue when the banknote is tilted.

The new currency also includes the Guarantee Clause, the signature of the Governor along with the Promise Clause and the RBI emblem on the right.

Rs 2000 in colour changing ink from green to blue and the denominational numeral along with Rupee symbol is included on the bottom right.

The Ashoka Pillar emblem is included on the right side along with the Mahatma Gandhi portrait and an electrotype watermark of 2000.

A number panel along with growing numerals from small to big is included on the top left side and on the bottom right side.

The bank note will also have the raised printing of Mahatma Gandhi portrait, bleed lines, Ashoka Pillar emblem and an identity mark.

The note will have a horizontal rectangle with 2000 printed with raised print located in the right.

The note will also have seven angular bleed lines on the left and the right side, again in raised print.

Salient Features on the Reverse

The reverse side of the new currency of Rs 2000 will have the year of printing of this note located on the left.

It also includes the Swachh Bharat logo mentioned along with the slogan.

The language panel is included in the centre.

The Rs 2000 currency note also has the motif of Mangalayan and the denominational numeral 2000 written in Devnagari.

The above mentioned features will help people to recognize this as the original bank note. The use of salient features for visually impaired will also ensure that this currency can be easily recognized by one and all.

Reserve Bank of India has also announced that they would issue new currency in denomination of Rs 500.