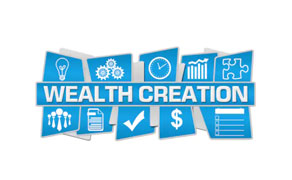 You buy equities to create wealth over the long run. Over the longer run, finding the best stock is not only about the best technical indicators for stock trading but about a lot more fundamental view. You need to approach it as wealth creation investing, and that requires a more fundamental and intrinsic approach to companies. The big question is how to identify the best stocks for long term wealth creation. Obviously, if you look back at some of the biggest wealth creators of the last 20 years like Infosys, TCS, Havells, Eicher etc, they all exhibited some unique characteristics that differentiated them from the rest. There were some very critical triggers; some we may have picked and some we may have missed. But the triggers were there nevertheless. Let us look at such triggers which can help you identify such stocks for the long run.

Where is the big growth going to come from?

When Infosys first spoke about the outsourcing model for software, not many gave the business model a real chance. Similarly when Eicher decided to gives the company a repositioning by focusing on the high end motorcycle segment, most analysts were still sceptical. But these turned out to be the real growth stories for these companies. The moral of the story is to focus on growth. A stable stock with a high dividend yield can never become a multi bagger and can at best be a market performer. Your focus should be on the handful of stocks that have a compelling story to tell and that are going to see growth getting pushed up to a much higher plane. We saw that in the case of pharma companies like Lupin and FMCG companies like Britannia; both of which became multi-baggers in the last 10 years.

Focus on the tipping point for becoming multi baggers

It is one part to identify a good growth story and another to time your entry into a stock properly. For example, when the Infosys story first came out in 1994, it was already a good stock. But, there was really no tipping point for the stock. The first tipping point came in 1999 when the major Y2K projects started flowing in and that is when Infosys and all the other technology companies became multi baggers. Britannia had formidable brands but had been a non-performer for a long time. The tipping point came when they focused purely on the high end FMCG food space. That is when the value started coming out. The tipping point matters a lot in these multi baggers.

Forget about wealth creation if the model is not scalable

When mobile phones were first introduced in India, the outgoing costs were nearly Rs.32 and incoming costs were Rs.16. At that price, it was always going to be a fancy model and never a business model. It was only when the telecom tariffs were slashed and a real mass market for telecom got built that we could see these telecom companies becoming profitable. Between the year 2002 and 2006, the stock of Bharti Airtel moved almost 30-fold and that was largely because the business model of Bharti became scalable. Without scale it is impossible to build stocks that can become multi-baggers. First, there has to be an idea then there has to be capacity to build scale and finally there has to be a big market. That is when value follows.

Are there any moat or entry barriers that the company has created?

The entry barrier essentially refers to some unique advantage that the company can create. It is also called a moat, in the words of Warren Buffett. This moat or entry barrier makes it difficult for others to replicate its business model. It is hard for someone to just walk in and replicate the scale and credit quality of an HDFC Bank or the distribution network of a Hero Moto. These are unique advantages that will sustain your value over a very long time. The moat could be scale, it could be a unique brand, it could be access to key markets etc.

Wealth creators are normally low on equity and debt bases

When a company is deep in debt, then the financial risk imperils the balance sheet and makes any meaningful wealth creation impossible. Why have low debt stocks normally been multi-baggers? That is because they handle down cycles much better.  Like a low debt base, a wealth creator must be stingy in the use of equity too. For example, companies like Tata Tele had such a huge equity base that it could never earn enough on a per share basis to get any reasonable valuation. Lower equity base means higher ROE, higher EPS and higher growth in earnings. Then you create wealth!

In the world today, there are just 2 companies that have a market cap of more than $1 trillion; Apple and Amazon. Both the companies are notorious for being misers when it comes to spending. This is all about being a miser inn a positive sense. When it comes to identifying multibagger stocks always prefer misers. Yes we are talking about companies that try to cut costs to the maximum extent possible and extract every penny of value out of the money that they spend. Value creation has never been a feature of the spendthrift corporates.

Your next big wealth creator may not be too far away. Just apply these basic rules and you are in business!