What do we understand by the payback period in equity investing? 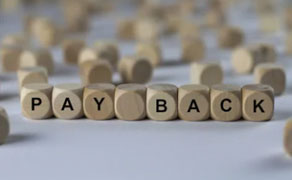 The concept of payback period is nothing new. We have been using it in the case of projects for quite some years now. It shows the number of years it takes to realize your investment back in the form of returns. Of course, this is assuming that your core principal still remains intact. Can we really use payback to evaluate equities? It is surely one of the methods that can be effectively used. Let us look at what is a good payback period of an investment with a payback period example. Let us also look at the payback period advantages and disadvantages in detail.

Take the stock of Alpha Ltd. and its price movement over a period of year. Tapan bought 10,000 shares of Alpha at a share price of Rs.100. The company has been consistently paying dividends of Rs.4 per share. Let us understand payback in different formats

Payback using dividends
As we can see in the above illustration, the stock of Alpha Ltd. pays a dividend of Rs.4 on the price of Rs.100. That translates into a dividend yield of 4% for Tapan. That means the payback period purely on the back of dividends will be 25 years. The dividend approach is not a very scientific approach because it does not capture the capital appreciation in the stock. People normally buy stocks for capital appreciation and the dividends do not capture the same. Hence this approach has very limited applicability.

Which is roughly equal to 4.54 years or it can be expressed as 4 year and 7 months.

That means the investment made by Tapan will be recovered in 4 years and 7 months.

In the above case, the CAGR yield in pre-tax terms for Tapan will be 15.86%, which a healthy level of returns.

This is one of the more pragmatic approaches since the investor gets returns net of tax only. In case of dividends there is DDT at 10% and on long term capital gains there is CGT at 10%. For simplicity we have ignored surcharge and cess and have also assumed that Tapan has utilized his limits of Rs.1 lakh in LTCG elsewhere.

What you need to know about payback period?
A payback is not a very scientific method of calculating the efficacy of stock returns because it does not consider time value. However, when you calculate the payback period and then use the Rule of 72, then the time value of money is automatically imputed to it. But payback period has an advantage in the sense that it is very simple to use and to compare across asset classes. On the downside, payback is reliable when it is historical but that may not be useful from a decision making perspective.