What is the difference between trading and speculation 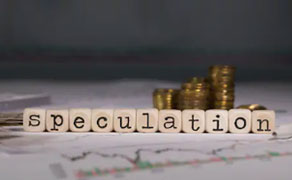 Speculation does not have intent of delivery, trading could have..

This is perhaps the most fundamental and important difference between trading and speculation. When you speculate you are actually betting on the direction of price movement or on the occurrence of an event. The idea in speculation is not to worry about capital protection or loss minimization. In speculation, more often than not, the outcome cannot be quantified as a product, unlike trading. When you trade you can either take delivery or you need not take delivery depending on how quickly the price moves in your favour. But, in speculation there is no intent of taking delivery at all. For example, betting on weather, betting on outcome of major events are all examples of speculation.

Trading is disciplined, speculation is not..

This is again an important distinction. What does a trade do? Basically, the trader calculates the amount of capital he is willing to lose, puts a stop loss while trading, sets profit targets and operates within these parameters. A trader will not commit all of his capital to one or two trades. A speculator will do exactly the opposite. For example, the speculator could believe that because of the warm weather there could be a locus attack on the coffee crop in Brazil. As a result the coffee prices could go up sharply. As a result, the speculator will commit most of his capital paying margin to buy coffee futures. Since the speculator commits too much capital behind a single trade, the risk of huge losses is much higher in case of a speculator than for a trader.

This follows as a logical corollary from the previous point. It is said that the primary job of a trader is to protect capital. Returns will follow as long as capital is protected through intelligent risk management. Thus trading is all about managing risk and not about managing returns. Speculation, on the other hand, does not focus too much on managing risk but on taking on risk. The purpose behind speculation normally is discrete i.e. you either end up with 1 or with 0. Trading cannot operate with that philosophy.

The gist of trading is that you focus on factors that are within your control. One can argue that how a company performs or a how a stock price moves is not within the control of the trader, but the trader can certainly control his exposure to the company. The trader may not have control over whether the Nifty goes up or down but he can surely use call and put options more strategically to make the best of the situation. The speculator typically operates under factors over which he has little control. The effort of the speculator is more on getting favourable discrete results in such a way that 1 or 2 profits can make up for a series of losses.

Speculation is taxed as speculative income and not as trading income
From the Indian perspective, it is also essential to understand the difference between trading and speculation from the tax perspective. The Income Tax Act defines any trade that is not intended to result in delivery as speculation. When you buy shares and take delivery it is normal business income. Similarly, when you trade in futures and options it is treated as trading income since the product does not permit physical delivery and the cash settlement can be seen as a proxy for physical delivery. But intraday trading is treated as speculative business income as there is no intent to take delivery in that case. Why is this distinction important from a tax standpoint? In the past, speculative income was taxed at a penal rate of 40% while other income was taxed at 30%. That distinction has been removed. Today, the difference is more in case of loss write offs. For example, a speculative loss can only be written against speculative income and not against trading income. Trading losses, however, can be written against trading profits and speculative profits.
In a nutshell, a speculator bets on events on a discrete basis whereas a trader relies more on capital protection and risk management. Therein lies the difference!