What we need to learn about working capital of a company 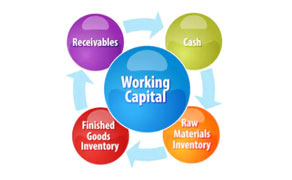 2.  When we refer to current assets, the reference is to cash, marketable securities held for short term, accounts receivables and inventories. Current liabilities include short term loans taken, accounts payable, taxes outstanding etc. When you need to get a picture of the quick working capital, then inventory is excluded from the definition of current assets to give a clearer and more genuine picture.

4.  One of the popular measures of net working capital is the change in working capital. But this has to be taken with a pinch of sale. For example, one can increase the current assets by giving more liberal credit terms and increasing debtors. This will increase net working capital but will actually make your operational cycle more illiquid.

5.  Working capital is also assessed on the basis of the current ratio and the quick ratio. The current ratio is calculated as (Current Assets / Current Liabilities). A current ratio of greater than 2 is considered to be healthy. A slight improvement is the quick ratio, which excludes inventories from current assets as they are not easily convertible into cash. The quick ratio gives a more reliable picture of liquidity.

6.  Just as a low current ratio is not desirable, similarly a very high current ratio is also not desirable. It implies that the company is making inefficient use of its short term resources by locking it up in debtors and inventories. It could also mean that the company has the potential to give more liberal credit to its suppliers which could actually be a business accretive decision.

9.  If current assets can be financed easily through assured credit lines and at a very competitive cost of funding, then the actual working capital ratios may not be too relevant. Even if the current assets are insufficient, it would not really matter as easy lines of credit should take care of the same.