When to Invest Money in Cyclical Stocks 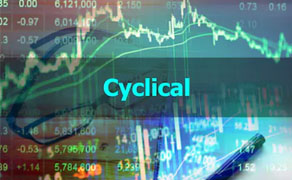 Quite often we tend to use the term cyclical stocks as an antonym of defensive stocks. That is not exactly true. Like in case of defensive stocks, there are certain sectors that have become cyclical or have moved away from being cyclical. A classical example is the private banking sector in India. For a long time the banking sector was considered to be a cyclical sector that used to move with the crests and troughs of economic growth. However, over the last few years, private banks have largely de-risked their business models. Firstly, they have included a large share of non-fund business into their portfolio and secondly they have started focusing more on retail credit and less on corporate and industrial credit; and that is less cyclical.
That brings us to the fundamental question; what exactly are cyclical stocks. As the name suggests, these are stocks that are vulnerable to the business cycles and have a multiplier demand effect of shifts in economic growth. There are quite a few sectors that are directly linked to economic growth. Cement, construction, steel, capital goods are all classic examples of cyclical stocks. Then there are stocks like consumer durables and automobiles that are not directly linked to economic growth but tends to see an indirect income effect emanating from shifts in economic growth. So, when should one invest in cyclical stocks?

When the government is undertaking a major capital spending thrust..
We have seen umpteen instances of the same. Back in 2003, the Indian government under Mr. A B Vajpayee undertook an ambitious Golden Quadrilateral project that had far-reaching implications in subsequent years on economic growth and the capital cycle .In fact the lag benefits of this move were felt all the way till 2011 when the capital investment cycle finally turned around. During the period, we have seen stocks like Crompton Greaves, L&T, BHEL, Reliance Energy and Tata Power become absolute multi-baggers. The scene changed drastically from 2011 onwards when these stocks became laggards. Hence the first mantra is to invest in cyclical stocks at the base of a major capital investment cycle.

When the metals are seeing the start of a super cycle
A word of caution; such super-cycles are very hard to predict. We saw a massive rally in metals from 2002 onwards and that went all the way up to 2011. We have seen stocks like SAIL, Tata Steel, Hindalco, JSW Steel become multi-baggers during this period. This massive spurt in demand was largely driven by demand from across markets while the demand post 2007 was largely driven by massive investments from China. China accounts for over 55% of all metal consumption in the world and hence any turnaround in the metal super-cycle will largely depend on Chinese demand. When it comes to the metal super-cycle, it is Chinese growth that you actually need to watch out for.

When there is frantic capacity expansion in the economy..
One of the big challenges in the current scenario is that there is hardly any capacity expansion that is happening in the economy. Most of the sectors are actually operating at nearly 68-70% capacity utilization. So companies can actually handle additional demand without any further investment. With demand for most products already tepid, there is no incentive for any company to really invest in expanding capacity. That is what is currently constraining the growth of cyclical stocks. Between 2005 and 2008, India saw tremendous investments in sectors like steel, power, telecom, infrastructure etc and all these factors put together created a major demand push for cyclical stocks. A classic antithesis is the Trump trade where cyclical stocks appreciated globally on expectations that Trump will keep up his promise on investing $1 trillion in infrastructure. However, there has been little progress on that front.

A major external stimulus is changing the cyclicals game..
This can come from a variety of factors. It can come from a trillion dollar infrastructure investment by Donald Trump in the US. It can also come from China investing over $400 billion in revamping their railway network. It could also come from Chinese companies stocking up on inventory of metals as is happening currently. Alternatively, it could also happen due to major reparations work undertaken in countries like Syria, Iran and Iraq that have been ravaged by war for many years. Any of these can be a stimulus for revival of interest in cyclical stocks.
The crux is that cyclical stocks are largely dependent on economic growth. When the combination of investment and growth is in their favour, these cyclical stocks can give humongous returns in a very short period of time. That is what makes these cyclical stocks very critical from a portfolio point of view. That is, perhaps, also why timing the purchase of cyclical stocks matters so much!