Why are stop losses so central to a traders performance 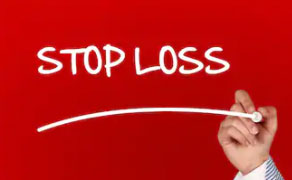 If you are a trader in the stock markets (or for that matter in any other market) you cannot ignore the concept of stop losses. A stop loss is a protection to your trade. You need to put stop losses irrespective of whether you are trading on the long side or on the short side. Markets by default are volatile and it is hard to predict how much the markets will fall. Also markets have the tendency to react violently to negative news flows and if you do not put a stop loss then your losses could escalate to a level where they could endanger your trading capital. That is why stop losses become so central to a trader.

The above technical chart clearly explains how a stop loss must be placed for a long trade and for a short trade. The historical technical chart above captures the price movement of a stock over the last 1 year. Very clearly the levels of resistances and supports are emerging from the chart. A resistance is where the price chart repeatedly hits and reverses down. A support, on the other hand, is the level where the price chart repeatedly hits and reverses upward. This concept of support and resistance is central to the idea of how to place your stop loss. In the above case the trader will initiate the long trade only above the support level once there is a confirmation of a genuine turnaround from the support levels. The question is where to put the stop loss? Ideally the stop loss should be placed slightly below the support level. That is because on occasions when the markets is very volatile the support can get temporarily breached and the stop loss could be triggered. That is why it is safer to put the stop loss slightly below the support level.
Where do you put the stop loss in case of a short trade? In the above chart, it is evident that the short trade is being initiated slightly below the resistance line. The stop loss will placed slightly above the resistance line so that stop loss does not get triggered in the midst of volatility. The moral of the story is that a stop loss is a necessity irrespective of whether you are trading on the long side or on the short side.

Every trader can trade in the market only with finite capital. Hence the primary objective of trading is to protect your capital. That is only possible in a measurable way by using the concept of stop losses.

Stop loss instils discipline in trade. The idea of trading is that you have a good idea of your risk-return trade off in each trade. That is only possible if you set your stop loss levels and profit targets well in advance.

Stop loss is your best defence against market volatility. By default you have to live with volatility in the market. The only way out is to protect your downside risk by putting appropriate stop-losses while trading.

By measuring your potential loss on the basis of stop loss on all your open trades, you get an idea of how much of your capital is at risk. That immediately acts as a trigger in case you need to appropriately cut your positions to reduce your risk.

Stop loss enables churn of your capital. As a trader your primary aim is to keep churning your capital and thus keep compounding your returns on a regular basis. Stop loss avoids situations where you are stuck in meaningless trades and blocking capital in the process.

Actually, there are 3 different types of stop losses that you can use
Which is the best stop loss strategy? The answer is, “It depends”. First is the technical stop loss which we saw in the chart above. In this case, the stop loss for a long trade is placed below the support line and the stop loss for a short trade is placed above the resistance line. The second type of stop loss is the affordability stop loss. You limit your total trades and restrict yourself to just 2 or 3 trades. Then you set your stop losses much deeper based on your affordability rather than technical levels. Lastly, there is the concept of trailing stop losses. When you are sitting on profits and want to hold on for little longer then trailing stop losses can be used to protect part of your profits. You can choose either of them based on the situation.

The crux of the story is that if you are a trader you need to build the stop loss discipline into your trading. It is the fundamental premise on which successful trading is actually based!