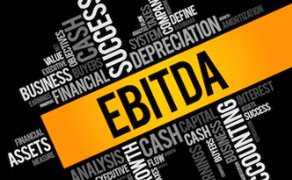 What do we understand by EBITDA, which is one of the most commonly used terms in financial parlance? Simply put it is the Earnings before Interest, taxes, depreciation and amortization. Essentially what you do is to take the EBIT (Earnings before interest and taxes) and add back the non-cash charges like depreciation and amortization. In other words, EBITDA represents your profit from the goods sold after adjusted for fixed costs. However, EBITDA does not consider the investment decisions of the company as the depreciation on fixed assets and the interest on loans are excluded from the calculation. You need to distinguish EBITDA from operating profits. EBIT is representation of your operating profits, not EBITDA.
One of the common measures for companies that are very capital intensive is EV/EBITDA. Companies with high gestation do not have profits in the early year and hence P/E cannot be calculated. Hence EV/EBITDA is a better measure. The question then is why do companies trade at different EBITDA multiples? What is a good EBITDA multiple and is there an EBITDA multiple valuation model. Before understanding valuation using EBITDA one needs to understand the concept of EBITDA margins. Interestingly, you will find wide variances in the EBITDA margins across industries. For example companies with high debt or high asset bases will show high EBITDA margins as the cost of debt and the asset depletion are not considered.

Let us look at 6 factors that lead to differences in EBITDA across sectors..

In-built mark-up on the core product is a key determinant of the EBITDA margins. We are talking about the operating mark-ups here. For example, pharma companies and IT companies tend to have healthy mark ups in their pricing model, although that is now coming under pressure. In case of telecom, the operational mark up is still high as most of the cost is capital in nature and that is not considered in your EBITDA margins. The average mark-up on the product price makes a huge impact on the EBITDA margin.

Sectors that are vulnerable to shifts in consumer preferences of competition in the form of alternate products are likely to be subjected to thin margins. For example, landline service providers faced severe pressure from mobile services. PSU banks and insurers have already seen pressure from private players in the industry. Globally, we saw how the shift towards smart phones almost led to the demise of Nokia. Such sectors where there is potential for disruption; they tend to see sharp shifts in EBITDA margins. You need to build that into your valuation models.