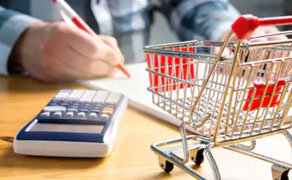 Things changed drastically after a normal monsoon in the year 2016. In fact, the Kharif output was nearly 9% higher for the year 2016 and that served to keep food inflation under check. The chart below tracks how overall CPI inflation and food inflation panned out since the monsoon last year

But non-food inflation could actually hold the key
The above trend clearly indicates that the major traction on CPI inflation in the last few months has come from non-food inflation. What has driven non-food inflation? Firstly, there is the price of crude oil. Crude oil not only becomes a part of fuel inflation but also has downstream ramifications on other sectors and tends to inflate costs across sectors. With the OPEC supply cuts in place, crude oil was showing an upward trend. With crude oil prices now falling below the $50 mark, the only worry is that the government may once again use lower crude prices to increase the excise on diesel and petrol, which will again tend to be inflationary.

The second aspect is that of services inflation. Of course services like transportation are largely linked to fuel costs and hence higher oil leads to higher services inflation. There is also another tax angle to services. Last year, the rate of service tax was increased from 14% to 15% through the imposition of the Swacch Bharat Cess and the Kisan Kalyan Cess. July 2017 will usher in the Goods & Services Tax (GST) regime in India. One of the outcomes of GST will be to increase the rate of service tax from 15% to 18% to put it at par with the overall revenue neutral rate. That could contribute to inflation in key services like transportation, telecom, education etc.

What will eventually drive retail inflation in 2017?
There is the risk of upside slippage in food inflation if the El Nino happens and monsoons are below normal. Food inflation could also get exacerbated as the impact of the base effect starts to wane. But the real worry in this year could be the impact of non-food inflation. Firstly, the government could use lower crude prices to hike the excise on petrol and diesel. That will have larger ramifications for downstream inflation. Secondly, GST could be the big X-factor. With services very likely to get costlier, we expect strong downstream ramifications on prices. The MPC is right in saying that the non-food inflation could be the key to watch out for. That could be the real risk for the Inflation Index in 2017!