Open an Account
Are We Heading Towards A Recession?

Are We Heading Towards A Recession? 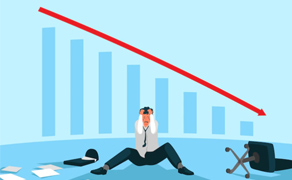 The words of Harry Truman ring true when you think about a recession: “Recession is when a neighbour loses his job. Depression is when you lose yours”. Of course, there’s no doubt that recession leads to depression. After all that the world went through in the past few years, 2022 was meant to be a year for new beginnings, a revival of positivity whether you wished to open a demat account and invest in the stock market, or sought a new job. However, the so-called “rebirth” has not occurred and the picture, for most of the world, looks gloomy. In spite of the prognostics of late 2021 veering towards optimism, the early part of 2022 still awaits it with bated breath.

The Shrinking of the Global Economy

As a matter of fact, in 2020, the global economy had already shrunk by around 3% based on data reported by the IMF (https://www.imf.org/en/Publications/WEO/Issues/2020/04/14/weo-april-2020). This was a decline that even exceeded that of the Great Depression of 1929, which lasted for almost a decade. Consequently, major nations were in the throes of a recession, including India. Although stock market trading was on, as far as stock investing was concerned, this saw a lull too. To add to the mess in the various economies of the world, came the news of a war. So, if you wanted to open a demat account in 2021, hoping for a respite in terms of the economy shaping up, you may have been disappointed.

Hope for a Silver Lining

Investors may well think that India is far removed from any crisis that takes place in the environs of Europe. Due to a bull run of a majority of startups and every and any upcoming IPO flooding the Indian market, prospects for India seemed good for a while, at least where equity was concerned. Every cloud may have a silver lining, but the timing of that silver lining is a matter of debate. Just when all the analysts and economists thought the global economic picture was changing for the better, the light at the end of the tunnel dimmed further.

In December, 2021, troops on either side of the Ukraine-Russia border started to mobilise. Ukraine stationed soldiers on western parts of Donetsk and Luhansk, and nearly 5 months ago, in February, Russia announced a “special military operation”, effectively invading the territory of Ukraine. The escalation of conflict didn’t take very long after that, and the ensuing armed warfare had rippled (and crippling) effects throughout the globe. The effect still continues, and although India tries its best to be bullish, encouraging people to invest or open a trading account, there can be no getting away from world events and their influence.

How Global Markets Get Influenced

It’s now acknowledged that both Ukraine and Russia have a lot to do with commodity markets on a global scale. They both account for a lot of these markets. They are neighbours and they produce (and export) every commodity, ranging from neon gas and wheat to fertilisers, chemicals, petroleum, and industrial-use metals. All these goods form critical inputs for the majority of industries around the world today. Besides this, in the area of stock market trading and commodity trading, these commodities take the forefront in investment, not just related to retail investors, but institutional investors as well.

Consider these facts: Wheat is important to breweries and bakeries, and make up feedstock too. Chip manufacturing makes extensive use of neon gas. Potash is important in  fertiliser production. Petroleum and natural gas are energy sources whose importance is widespread, and metals and steel are used in all spheres of most manufacturing units. The war in the eastern parts of Europe has sent tremors that have ferociously shaken the international marketplace. Consequently, the prices of commodities have peaked at historic highs. This, in turn, has effectively disturbed the supply chains, hurting consumers.

The prices of raw materials have hit the roof. Hence, it comes as no surprise that producers and manufacturers naturally transfer some (most, in many cases) of their costs to people who purchase goods, the consumers.  However, generally, such distortions have a temporary life, except that with the current state of affairs, things are apt to travel south before individuals see some betterment. If your aim is to open a demat account and trade in commodities or stocks, you may find prices high right now. However, for those who had invested earlier, prior to the economic crisis, some gains would be evident.

No Help from Sanctions

Although India isn’t directly involved in the Ukraine crisis, anything that affects the global landscape, influences all of the world. In response to Russia’s invasion of Ukraine, the West collectively issued sanctions to damage the Russian economy. Trade with Russia was curbed too. India, on the other hand, has chosen to honour its traditional links with Russia. The chief goal of the sanctions was to topple Russia’s financial status to make the country “aligned” with the interests of the global community. However, although the Russian currency, the Ruble, depreciated in value against the USD at the start of the crisis, it has all but recovered now.

Towards Recession, or Already There

In India, inflation is hitting fresh highs. The brunt of it is being experienced by small businesses, large corporations and the public, in general. Many potential investors would rather not open a demat account in this day and age to trade in the stock market. There are some die-hard brokerages who would refute this, but there is no denying the fact of price hikes we see everyday. Natural gas and crude oil prices have been up and up since the start of the Ukraine conflict. Still, relative to the global front, India’s situation where inflation is concerned will be mitigated. A large section of Russia’s energy supplies, previously destined for EU and US shores, are now diverted to India, among other countries. India may suffer less than western nations, but it still suffers, nevertheless, due to inflation.

The Right Time to Invest

From an investor’s point of view, you may wonder whether it is a good idea to open a demat account and invest in equity. Furthermore, you may think of other investments at this time. There is no right and wrong time to invest, whether you wish to do so with any upcoming IPO or less riskier options like mutual funds. Investment, in the long run, will always stand you in good stead for future gains.