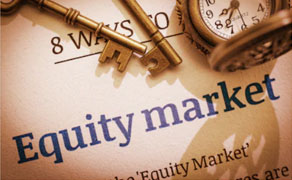 Equity market had an outstanding year in 2017. Benchmark Index Nifty50 gave a return of ~28% while the Nifty Midcap 100 and Nifty small cap 100 outperformed with returns of 47% and 57% respectively. This is a great achievement given that they were on the backdrop of two major reforms – Demonetisation and GST - which had impacted the economy as well as the market. Despite several geopolitical issues, Global markets too climbed to their record highs in 2017.

Government continue with major reform - The highlight of 2017 was the government continued focus on reforms like GST, IBC, RERA, infrastructure development, Direct Benefit Transfer, Housing for All, PSU Bank recapitalization plan, etc. during 2017 which were well received by the market. Strong liquidity both from domestic as well as international investors were also supportive throughout 2017.

GDP growth improving - On the macro front – GDP growth was seen slowing by the mid of the year (5.7% in Q1FY18), but witnessed some recovery later (6.3% in Q2FY18). The corporate earnings growth was still elusive, even as there were some signs of improvement in the Q2FY18 results. 2HFY18 is likely to see better growth on the back of healthy demand during festive season, low base of last year and

Sovereign Rating Upgrade - In a major boost to the government reform process, International rating agency – Moody's upgraded India's sovereign credit rating to Baa2 from Baa3 after a period of 14 years (last in January 2004) citing continuous improvement in economy and fiscal metrics. The rating agency has forecast India’s GDP growth at 6.7% in FY18 and 7.5% in FY19.

Changes in Union Budget - The Union Budget for 2017-18 witnessed many changes. The 92 year old Railway Budget was merged with the Union Budget, classification of plan and non-plan expenditure was done away with and the budget was proponed to 1st February rather than the customary last working day of February.

BJP wins State Elections - There were 7 state elections during 2017 including key states like UP and Gujarat. BJP (the ruling party at center) formed government in 6 of these states. This was seen as a positive development for the equity market as a sign of political stability and continuity of reform process.

Year of IPOs - 2017 was a landmark year for IPOs with more than 125 public offering raising ~$11.5 billion from the market. 2017 also saw equity issuances of companies from several new sectors, such as Life Insurance, General Insurance, AMCs and New-age small finance banks.

New set of Sectors outperformed - The outperforming sectors during 2017 were Consumer durables, Real Estate, Metals, Telecom, BFSI while the ones which underperformed were Pharma and IT.

Going ahead, we expect Equity market to continue to deliver consistent returns in 2018 as well on the back of stronger economic growth and recovery in corporate earnings. However the scale of returns expected would be in the range of 10-15% on the back of a high base and normalization of valuations playing out in 2018.

Cyclicals like Cement, Infra, capital goods which are expected to benefit from the higher government spending.

GST beneficiaries like jewelry retail, footwear, building material are expected to benefit from the value migration from unorganised to organised players.