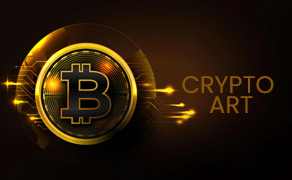 An NFT or "non-fungible token" is a unique non-transferable data unit that is kept on a secure blockchain. They are certificates of authenticity in the sense that they each have their own encryption code that cannot be hacked. An NFT keeps track of the digital artwork's creator, market value, and ownership. This allows you to validate an NFT in the same way that you would a traditional painting. NFTs have been around since 2015, but it wasn't until 2020 that they became popular. The crypto art business then took off in 2021.

Artists have risen to NFT superstardom throughout the year, billion-dollar brands have been built in a matter of months, and NFTs have altered lives time and time again. The following are some of the top crypto artists in 2022:

1. Alpha Centauri Kid: After getting a coveted XCOPY co-sign, Alpha Centauri Kid stunned the crypto market with his record-breaking auction on SuperRare in October 2021 for "ctrl + alt + generate." The piece was sold to 6529 for 165.29 ETH ($606,568) after a heated bidding war that included famous collectors including Cozomo de' Medici and Starry Night Capital.

2. Andra Oshea: Throughout 2021, Oshea has published a number of notable works, including A Young Boy's Dream, a tribute to Chadwick Boseman. His piece Ego Death was auctioned as part of nft now x Christie's "The Gateway," which was exhibited as part of Christie's first-ever on-chain sale. Andrea Oshea is a notable Black crypto artist and 3D animator living in Atlanta, Georgia. He's worked with companies such as Snapchat, Vogue, Adult Swim, Netflix, and others.

3. Black Dave: Black Dave is a visual artist, producer, and musician based in Charleston, South Carolina. Dave is a prolific creator who works on numerous projects in various genres at the same time, claiming anime, rap, hardcore rock, and streetwear as his primary sources of inspiration. Throughout the year, he's continued to produce a wide range of music and NFT releases, establishing himself as one of the most significant Black voices in the NFT sector.

4. Cath Simard: Over the last year, landscape photography NFTs have had a revival, empowering a new generation of brave explorers like Cath Simard. Following the sale of her popular #FreeHawaiiPhoto to prominent collector GMoney for 100 ETH ($303,481), the Sony Alpha ambassador soared to fame in the sector, becoming the world's first photographer to have herrights liberated following purchase.

5. Diana Sinclair: Sinclair is a 17-year-old visual artist, activist, and curator who has received critical recognition. She was named a 2021 YoungArts National Finalist in Photography in November 2020, and she has quickly established herself as a fixture in the NFT scene. Sinclair had already built up a strong network of support within the NFT area before making history with their work on OneOf's Whitney Houston auction. They primarily focus on art that examines identity, self-exploration, and social justice. The historic $999,999 transaction not only demonstrated how NFTs can help classic musicians transition into a new era of music culture, but it also raised Sinclair's status as a rising star.

The crypto space, however, is still considered to be highly speculative. You need to have long-term financial investments such as Fixed Deposits, Mutual Funds, Emergency Funds and insurances in place. You need to have a surplus amount of money that you can afford to lose, and only then consider investing in digital assets.