Open an Account
What are Bars and Candlesticks on Trading Charts

What are Bars and Candlesticks on Trading Charts 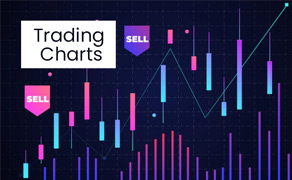 A forex chart is a type of window that allows us to see what is going on in the currency market. It is often shown as a graph, with the price on the right side and the time on the bottom. It's a graph of price vs time if you will. However, how the prices on the graph are portrayed has a significant impact on how we understand the currency market. These forms of presentation strategies are referred to as chart types.

In comparison to the line chart, the Japanese candlestick chart provides more information. Each candle indicates four things: the opening and closing prices of a certain period, as well as the highest and lowest price levels within that time frame.

Since the data they depict is almost identical, the bar chart and the candlestick chart are highly similar. They both show prices that are open, closed, high, and low. However, there are some minor changes.

The distinctions between bar and candlestick charts are small, and in some cases non-existent.

When creating trend lines and zones on the chart, the bar chart may give you a little more accuracy. Because bar charts are really simple lines, this is the case. Candlesticks, on the other hand, have larger bodies that take up more space and make accuracy more difficult. Even though the difference may be insignificant, some skilled traders believe it has aided them in making better online trading judgments.