Open an Account
What does the IMD monsoon forecast mean for Indian markets?

What does the IMD monsoon forecast mean for Indian markets 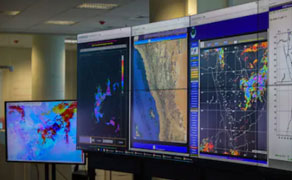 The interim monsoon assessment provided by the Indian Meteorological Department (IMD) in the month of May has predicted an above average rainfall for the year 2017. For over 100 years the meteorological forecast forms the basis for the markets, for demand estimates and for national aggregates. Normally, the IMD puts out its initial forecast in April and then an update in May each year. It is only in June, after the actual of monsoon, that the first live estimates based on monsoon data are available. Since 1871 there have been 19 years when India has seen major floods while in 26 years there have been major droughts. The remaining years have been years of approximately average rainfall.

Dual forecasts from IMD and SKYMET..
In India, the monsoon forecasts are typically put out by two agencies. There is the government owned IMD and the privately owned SKYMET. In the current year forecast, there seems to be a discrepancy between what the IMD predicts and the SKYMET predicts. For example, the IMD in its May update has stated that the El Nino effect, that was feared to impact in 2017, has weakened and hence IMD expects the actual rainfall to be in the upper end of the Average Rainfall range. That implies that the actual rainfall during the year could in the range of 102% to 104% of LPA. The SKYMET, on the other hand, has predicted that it may be too early to write-off the El Nino effect and that the rainfall may be normal to below normal. However, even the more pessimistic estimates of the SKYMET largely rules out the possibility of a drought, which is defined as rainfall below 91% of the LPA.

Why are monsoon forecasts so important for India?
The timeliness, spread and quantum of rainfall has larger implications for the Indian economy with far-reaching implications. Here are a few of them..

While agriculture may account for less than 15% of overall GDP, it still accounts for a chunk of all-India employment. According to estimates, nearly 55-60% of the Indian population directly or indirectly depends on agriculture for their livelihood. If you take just  the rural and semi-urban areas, the actual proportion could be much higher.

Sufficient and timely monsoon has a strong bearing on the overall agricultural output. For example, in year 2016, the Kharif output was nearly 9% higher due to favourable monsoon conditions. The reverse was the case in the drought years of 2014 and 2015. This becomes a key metrics for food inflation, which is the most important component of retail (CPI) inflation. In the last 6 months, the food inflation has fallen to as low as 0.61% purely on the back of abundant agricultural output last year.

Low food inflation has larger implications for the RBI rate stance. The Monetary Policy Committee (MPC) has reiterated time and again that a dovish rate stance will be conducive with low levels of retail inflation. If food inflation remains low, then the RBI will be inclined to be more dovish in its interest rate stance, something the industry has been demanding all along.

Lastly, rural and semi-urban demand is largely a function of the trends in rural incomes, which in turn depends on the agricultural output. Major sectors like FMCG, two-wheelers, entry level cars, consumer durables, agro-chemicals, fertilizers, and tractors are all dependent on the buoyancy of rural and semi-urban incomes.

To conclude, the monsoon is not just about whether India experiences a drought or otherwise, but it is about the much larger economic ramifications. For the Indian economy, monsoon forecast continues to be the one big data point that drives the economy and the indian stock markets!