What explains the sharp gyrations in Nifty and Sensex post budget? 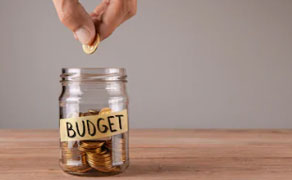 Stock gyrations are nothing new in India and if you look at the history of the market over the last many years, it has been marked by constant gyrations. In fact, even in the midst of a secular uptrend the market has seen sharp fluctuations. For now, let us focus on the stock market gyrations post budget. Why has the stock market post budget show a lot of ambiguity between a vertical fall and a sharp bounce? If you plot the 1 month chart of the Nifty and the Sensex post the Union Budget, the trend has been clearly downward. Largely, that can be explained by the Union Budget impact on stock market.

As can be seen from the above chart, the Sensex has lost 4.91% while the Nifty has lost 4.76% since the budget. And this downward trend has come with a lot of intermittent gyrations. What exactly explains these gyrations, especially post the Union Budget..

A vote for reforms and for spending..
The Union Budget has, in a way, had a rural thrust. To the credit of the government, the budget did not go all out to appease the farmers with sops. Instead, it has looked at genuine efforts to improve rural incomes, as promised, by 2022. Here is how..

The budget has made a bold move by assuring farmers an MSP at 1.5 times the cost of production. This will not only be a positive for farmers, but will also boost the use of hybrid seeds, fertilizers, agro-chemicals etc to enhance productivity since farmers will get compensated for that too.

The allocation of Rs.13 trillion to rural livelihood is a big boost for rural jobs creation. It diverts rural energies to move beyond the farm and also look at genuine alternate job opportunities.

The budget has focused heavily on infrastructure spending, especially in the rural and semi urban areas. This will ensure that the overall cost of doing business comes down, India gets better connected and it also creates gainful employment. It is estimated that quality infrastructure will add nearly 2% to GDP growth annually.

The budget has made a shift towards making imports contribute towards the exchequer in the form of higher tariffs. That is likely to slightly bloat household budgets in the premium demand segments. But, the government has also tried to put more money in the hands of people by re-introducing Standard Deduction for individuals. There are also sops for senior citizens in the form of greater exemptions on bank interest.

The fiscal deficit spilling over by 30 basis points for the next two years is not great news. It is likely to be viewed negatively by global investors who have long stood by Indian markets for its commitment to fiscal prudence. That could also impact the recent rating upgrade that Moody’s had accorded to India.

The big dampener was the tax on long term capital gains (LTCG). This had been tax free since 2004, the year STT was introduced in India. This budget introduced 10% capital gains tax on LTCG above Rs. 1 lakh. To add insult to injury the STT continues as before making it a double whammy for the investors.

Continuing on the issue of tax on LTCG, the real culprit was the grandfathering clause. The budget has declared long term capital gains to be exempt if booked before March 31st. That led to a bout of profit booking ahead of the March 31 deadline. Most investors will look at taking away profits off the table at least once before the cut-off date.

The tax on equity fund dividends has also not gone down well with the markets. Equity funds did not attract DDT (Dividend Distribution Tax) and tax in the hands of investors. Now they will attract tax in the hands of investors in case of capital gains and when dividends are paid out they will be paid only after DDT of 10% is deducted. This virtually amounts to double taxation.

The moral of the story appears to be that post budget the markets are caught between an attractive growth story and post-budget concerns. The valuations are high but the earnings are expected to catch up very soon. The budget has raised some pertinent questions. Will equities still be attractive if bond yields go up higher? Secondly, will top-line growth and bottom-line growth sustain with higher oil prices and higher interest rates? Thirdly, will equities still be the first choice after the tax imposed on LTCG? The problem is that there are too many immediate uncertainties. That is, probably, creating all the gyrations in the Nifty and the Sensex!