How global factors have influenced the value of the Rupee 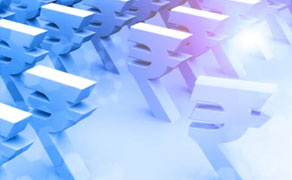 When we talk of rupee value, we always talk of it in terms of the value of the rupee vis-a-vis the US dollar. Of course, the RBI also regularly publishes the exchange rate of the INR versus the dollar, UK Pound, Euro, Swiss Franc, Australian Dollar and the Japanese Yen. But, the dollar being the virtual benchmark for global trade and transactions continues to be the biggest determinant of the Indian rupee. Let us look at some of the key global factors that impact the INR / US$ equation

Fed monetary stance
If you have ever wondered why currency traders follow the Fed minutes so closely, here is why they do it. The Fed monetary stance virtually sets the tone for the future direction and trajectory of Fed rates. The Fed rates are the basis on which US bond yields get determined. Higher Fed rates mean higher yields on US bonds. For global investors who are looking at a risk-off strategy to make money, this is a great opportunity. When they can earn higher returns investing in safe US bonds, why should they risk by going down the rating curve? When the Fed increases rates the dollar strengthens and that leads to a consequent weakening of the INR. The Fed monetary stance is not only important from the point of view of rates but also from the point of view of the tapering of the bond portfolio. What exactly is this bond portfolio?

When the US economy got into a financial crisis in 2008, the US Fed decided to support the markets by buying up bonds and infusing liquidity in return. This led to the Fed bond portfolio growing from $1 trillion to $4.5 trillion in the 8 years since the crisis. This bond portfolio is likely to be unwound from September 2017 onwards. When the bond portfolio is unwound, it will lead to a hardening of yields in the US bond market and a strengthening of the dollar. That leads to a consequent weakening of the rupee. In fact, one of the key reasons, the INR has strengthened since January 2017 has more to do with the weakening of the dollar index.

The chart above depicts the USD-INR rate plotted with the dollar index (DXY) over the last five years. During most of this period they have tended to perform in sync with one with one another barring some minor divergences. The dollar index took a long time to cross the 100 mark; but post January 2017 the DXY has been on a consistent downtrend that has resulted in strengthen of the rupee. There are also extraneous factors that impact the INR due to the dollar index. For example, when the Yen, due to its current account surplus, emerges as a safe haven currency, the yen appreciates versus the dollar. This also strengthens the INR due to weakness in the dollar index. Similarly, when Europe got into trouble during the peak of the Greek crisis in 2014, the Euro weakened sharply against the USD. This led to a sharp weakening of the INR vis-a-vis the dollar although there was nothing much that had fundamentally changed in the Indian fundamentals.

Capital flows; both FPI and FDI
Foreign direct investment (FDI) has been termed as stable money while FPI flows are referred to as hot money. That is because FPI flows are portfolio flows and can reverse direction at short notice. We saw a huge equity sell-off in 2008 and a massive debt sell-off by FPIs in 2013. In both these situations, the INR value cracked sharply. Interestingly, over the last 2 years, India has emerged as the largest annual recipient of FDI investments and that has given a higher degree of stability to the INR. Capital flows normally are responsible for sharp movements in the INR. Normally, capital outflows tend to have a domino effect on the rupee and the markets. More selling leads to more demand for dollars and leads to weakening of the rupee. The weakening of the rupee, in turn, leads to more selling as FPIs want to guard themselves against currency depreciation eating into their portfolio returns. While the INR is not freely tradable in global markets, many other economies like Russia, Malaysia, Thailand and Singapore have seen this domino effect playing out quite rapidly when speculators combine with sellers.

Currency wars are as close to reality as ever
A currency war is a mutually internecine war among nations where each nation is trying to boost its exports by weakening its currency further. Normally, currency wars are known to be harmful to all nations that participate in these wars. While India has not seen currency wars, we came close to that in September 2015 when China deliberately weakened the Yuan. This led to most EMs weakening their currencies to stay competitive in terms of exports. India also had no choice but let the INR weaken. Currency wars are not too common but that is a possibility that economists have been talking about for quite some time.

The rupee value is measured in terms of the US$. Hence, it is by default exposed to external factors. Whatever impacts hard currencies like the Dollar or Yuan or Euro tends to impact the INR too!