How to bargain hunt for stocks in the equity markets 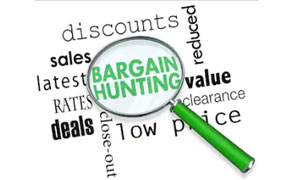 By now most of you are familiar with this extremely enticing words "Bargain Hunting". More often than not, bargain hunting advice boils down to buying the well established stocks at lower prices. That is, of course, part of the story. But, you will be surprised to know that bargain hunting is actually not all that complicated. At least, it is nothing like rocket science! In fact, you yourself can indulge in effective bargain hunting by following some basic ground rules.

When it comes to bargain hunting, it is not just about the level of the market. Let us take a few examples! In 2009, Eicher Motors was quoting at Rs.200 and is up 150 times in the last 8 years. Similarly, between 2012 and 2017 TVS Motors has appreciated 40 times while Avanti Feeds is up over 70 times. What explains this kind of spectacular outperformance? Is there is a more organized methodology for you to identify such fantastic bargains? Remember, as Peter Lynch put it, "Bargains are available at all times and it is all around you. It is for you to open your eyes and ears and spot them." Let us see how to go about identifying such bargain stocks..

Is a good stock down due to bad markets?
This is the basic building block to identifying bargain stocks. Remember, when there is a market correction overall, your bargain stocks are not going to be spared. When you have identified a bargain stock and the stock corrects, the first question you need to ask is whether there is any structural problem. We have seen stocks like Kingfisher and Deccan Chronicle falling vertically for months, but there were larger structural problems in these companies. No point in bargain hunting in such stocks. Firstly, be clear that the stock you are tracking has fallen only in sympathy with the larger market and its fundamentals are not impacted in any way.

Hot bargains are never found in hot sectors..
Remember, this fundamental rule. Bull markets are based on broad stories; bargain hunting is not based on broad stories. What was so exciting about Eicher buying out Royal Enfield or what was so exciting about a company like Avanti Feeds which was supplying shrimp feeds? Similarly, what did TVS Motors do that Bajaj Auto and Hero Moto really could not? When the sector is hot you get to buy momentum, you normally do not get to bargain hunt.

The first proof lies in revenue growth and profit growth..
Bargain stocks give uniquely impressive performance and they give this performance consistently. Look at larger stocks with a bigger market cap like Britannia or Motherson Sumi. Notwithstanding what happened to the industry at large, these companies consistently gave stupendous growth in top-line and bottom-line quarter after quarter. That is why bargain hunting stocks take time to manifest returns. Markets are convinced only after they such consistent performance over a period of time and are convinced that the company is really doing something right.

Does the company maintain high standards of transparency and governance?
This may sound quite hackneyed but there is a common link. From the days of Infosys we have seen that the companies that have emerged as good bargains are those that have maintained higher than normal standards of disclosure, transparency and governance. Normally, investors are not comfortable with a situation where the company is trying to conceal facts from the public. Opacity and good valuations do not go together and you get multi-baggers only when markets upgrade valuations. Historically, some of the biggest stock price implosions in the world are a result of poor governance standards. Enron in the US as well as companies like Satyam and Kingfisher in India are cases in point. As Mr. Narayana Murthy rightly put, "When in doubt, disclose". That is the key!

Is the company doing something highly disruptive?
This is a highly subjective judgement. While there cannot be clear cut rules for identifying such disrupters, there are some examples from the past which we can use as a guide. Back in the mid-1980s the two-wheeler market was dominated by Bajaj Auto. When Hero Honda entered the market with fuel-efficient and stylish bikes, they literally disrupted the market and expanded it manifold. Infosys, with its focus on quality low cost outsourcing models, changed the rules of the game and brought scale and profitability to the Indian IT sector. Today, take the case of how RIL has disrupted the telecom market place with its focus on data instead of voice.  Not all disrupters end up as multi-baggers but a bargain stocks necessarily has to be a disrupter in some form!

Focus on low market cap, low debt, low capital base companies..
Lastly, remember the golden rule that elephants cannot dance. It is more conceivable for a Rs.2000 crore market company to become  multi-bagger rather than a company with a market cap of Rs.100,000 crore. Secondly, highly leveraged companies have typically been value destroyers rather than being value enhancers. Lastly, keep your focus on companies with a low equity capital base that can be serviced easily. Take the case of Tata Teleservices. It continued to underperform even when the likes of Bharti Airtel and Idea became multi-baggers. The reason was its huge capital base which made it impossible for the company to earn enough to service the capital.

The moral of the story is that bargain hunting is not as complex as it is made out to be. You just need to understand some basic rules but more importantly, you must have the patience and conviction to hold on for the long haul. These rules may not help you identify a multi-bagger but will surely help you to recognize one when you come across a potential bargain next time!