What is Transposition in CDSL | Motilal Oswal
Open an Account

What is Transposition in CDSL 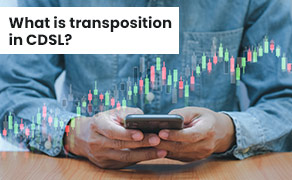 The full form of the acronym, CDSL, stands for the Central Depository Services Limited. It comes only second in importance to the National Securities Depository Limited, in terms of its magnitude and importance. It has existed as a depository institution since 1999, and holds several securities including bonds, shares, etc. Working under the auspices of the BSE, the Bombay Stock Exchange, the CDSL is largely promoted by the Bank of Baroda, the State Bank of India, HDFC Bank, Axis Bank, the Standard Chartered Bank, and the Union Bank of India. Almost six hundred brokers are linked with the CDSL in various capacities. If you open a CDSL demat account, then you can buy securities and sell them, limited to those associated with the depository (those listed on the BSE).

The CDSL and the NSDL

The two national securities depositories in India are the CDSL and the NSDL. When you wish to open a demat account to invest in the share market, or any other securities like bonds and ETFs, you can do so with any DPs (depository participants) listed with either the CDSL or the NSDL. Both these depositories hold the securities of investors in digital formats. However, is there a difference between the two? Both the NSDL  and CDSL maintains the digital formats of securities. National Stock Exchange or NSE is the primary market for the NSDL and Bombay Stock Exchange is the primary market for the CDSL but the exchanges can use either of depositories for settlement.

What is the meaning of transposition?

When securities are held jointly, say by two individuals, one of these is the first holder, and the other, the second holder. The first holder’s name is, for all official transactions with a given security, the primary name that is assigned to that security. In case you wish to change the order of the names of owners for securities, you have to undergo a process called “transposition”. Whether you have invested in any upcoming IPO and got shares allotted to you or bought shares directly and hold them in a demat account, the order of the holders’ names on any document (like an IPO subscription form, for instance) which is related to the demat account should be the same as the names assigned to the demat account.

The dual facility of transposition and dematerialisation is offered by CDSL via all its listed DPs. When you open a demat account, you may do so in any names, and get your physical shares dematerialised conveniently. While you explore this facility at Motilal Oswal, do not forget to check out any upcoming IPO you can grab.