What is an IPO Lock Up 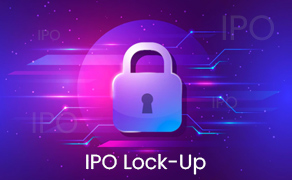 What is an IPO Lock-Up Period?

A lock-up period is intended to prevent early investors and insiders from selling their shares for a predetermined amount of time after a company's Initial Public Offering (IPO). It reduces selling pressure in the early stages of publicly listed firms. Founders, workers, venture capitalists and private investors generally own private enterprises. They take the firm public for two reasons. The first is to obtain capital to expand the firm. The second reason is that they want to recoup part of their initial investment.

Although newly listed companies determine how many shares to issue, it is fairly unusual for founders or early investors to maintain significant holdings in the company following the IPO. If one or more of them opt to sell a major portion of their shares, the share price may fall significantly which is not in the best interest of the firm or any of its investors. As a result, existing investors are often barred from selling their shares for a specified length of time following the IPO, generally 90 to 180 days. Finally, lock-up periods are all about supporting the share price, minimising volatility and stabilising the market for shares in the months after listing.

What Happens to the Share Price of a Corporation Once a Lock-Up Period Expires?

When the IPO lock-up period expires, the company's main shareholders are free to sell their shares. If the owners of those shares decide to sell, a flood of new shares may enter the market. If the share price has risen since the IPO, early investors may seek to cash in by selling part of their holdings; if the price has fallen, they may want to decrease their exposure. However, it does not guarantee they will sell either way since they might choose to maintain shares in the expectation of prices rising further higher, or because they feel shares could recoup any value lost in the early days as a public business.

Much emphasis is placed on how the share price has done in comparison to the IPO price, but it is important to note that early investors are likely to have paid substantially less. As a result, even if the share price has fared badly since the IPO, many early investors will still be able to benefit. The expiration of a lock-up period provides a significant signal about the major shareholders' confidence in the company's future. If institutional investors opt to sell the shares after the lock-up period expires, it indicates that they have little trust in the firm. If these investors sell a modest number of shares, it indicates that they wish to keep the shares and are optimistic about the stock's future.

Typically, if there is a significant rise in the number of available shares in a corporation, the stock price falls. It is fairly uncommon for the share price of a company to decline on the first day when the lock-up shares may be exchanged. In reality, if other investors (who are not subject to the lock-up period) start selling in the days before the lock-up ends, it indicates that they anticipate the share price to decrease.

However, there is an argument that the end of a lock-up period might be helpful if there is any early sell-off, since it also signifies that the stock has improved liquidity which financial institutions and major investors like. Because it is not unusual for the majority of a stock's shares to be subject to it, liquidity may be restricted during the lock-up period which may mean they do not initially match the conditions necessary by institutions or pension funds.

How to anticipate the impact of an expiration lock-up period on the share price?

Difference Between an FPO and an IPO

When an unlisted firm offers shares to the public for the first time and is listed on the stock market, this is known as an Initial Public Offering, or an IPO. Follow-on public offering, or FPO, on the other hand, is a procedure that occurs after an IPO in which the corporation offers additional shares to the public.

Upcoming IPOs are those that have filed a DRHP and are set to go public in the coming months of 2022. IPOs have seldom seen strong investor interest as they have in recent years. According to data, the total collection for IPOs has already surpassed the Rs 100 lakh crore barrier this year.