Open an Account
What Matters for a Premium IPO Valuation

What Matters for a Premium IPO Valuation 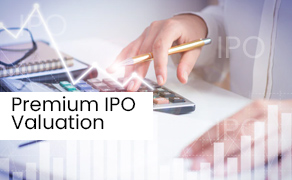 An Initial Public Offering (IPO) is the process of transforming a privately held firm into a public corporation whose shares are exchanged on a stock market. This, at times, is described as "going public". A private firm that becomes a public corporation is owned by the shareholders who buy its shares. Many IPO participants are unaware of the method by which a company's valuation is calculated. An investment bank is recruited - before the public issuing of the stock - to evaluate the worth of the firm and its shares following which they are listed on an exchange.

As an investor, it might be difficult to analyze a firm with freshly issued stock that has not previously traded on an exchange. Smart investors, on the other hand, may attempt to grasp a company's financials by reviewing its registration paperwork and examining the company's financials to see whether the stock is priced correctly. Furthermore, anybody interested in becoming an early investor should grasp the many components of how an investment bank calculates a company's IPO valuation.

Not all the criteria that go into determining an IPO value are quantitative. A company's narrative may be just as compelling as its sales estimates. A valuation method may assess if a firm is delivering a novel product or service that has the potential to transform an industry or is at the forefront of a new business strategy. Companies that pioneered the Internet in the 1990s are a fantastic illustration of this. Because they were pushing innovative and interesting technology, several of them were valued in the billions of dollars, although not making any money at the time.

Some businesses may inflate their corporate story by hiring industry experts and consultants to seem to be a developing company with experienced management. The real fundamentals of a firm may often be buried by its marketing strategy, which is why early investors must analyze a company's financials and be mindful of the hazards of investing in a company with no trading history.

The goal of an IPO is to sell a certain number of shares at the best possible price. As a consequence, corporations will often only execute an IPO when they expect strong demand for their shares. Because stock values were low across the board during the stock market drop that happened between 2009 and 2010, the IPO market virtually vanished. When a company's stock is in high demand, it's possible that the buzz around its products may outweigh its fundamentals. This is advantageous for the corporation obtaining funds, but not for the investors purchasing shares.

An IPO is like any other investment where investors must do their homework before committing any funds. A decent starting point is to look through prospectuses and financial statements. One disadvantage of investing in IPOs is that the firms are generally new and have a limited track record of revealing financial information. Companies must, however, provide balance sheets, income statements, and cash flow statements for the public as part of the IPO process.

The year 2021 proved to be a fruitful year for primary markets, with over 63 IPOs going public and generating over Rs 1 lakh crore. This IPO rally is expected to have attracted around 1 million investors. One97 Communications (PAYTM) raised Rs 18,300 crore in its Initial Public Offering, the highest ever in India. New-age technology businesses such as Zomato, Paytm, Nykaa, and Policybazaar issued Initial Public Offerings (IPOs) in India in 2021, while stock market main indexes surged to new highs despite COVID worries. Experts predict that commencing in 2022, there will be a similar wave of upcoming IPOs throughout the year.