Why companies that reduce debt outshine the market 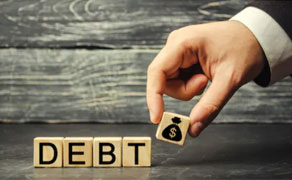 Why do companies add debt in their balance sheet? From a cost of capital point of view, there are a few key reasons for companies to add debt. Firstly, the cost of debt is considered to be lower than the cost of equity. That is because the only cost of debt is the interest cost but in case of equity it is the return required by shareholders, which includes a risk premium in case of equities. That is why the cost of equity is much higher than the cost of debt. Thus by adding debt to the capital, the company actually reduces its average cost of capital. Secondly, when the cost of capital for the company is lower, the future cash flows of the company get discounted at a lower rate of discounting. That implies higher valuations for the company and appreciation in the price of equity share. Lastly, there is also an equity dilution angle to it. The more equity that a company issues the larger is the capital base to be serviced. This leads to lower EPS and hence lower stock prices. Effectively, addition of debt to the balance sheet improves the valuation of equities. But that is only theoretically true!

Let us look at the practical side of this argument..
What we have seen in the Indian context is that companies with lower levels of debt have tended to outperform. Take the case of companies in the software segment like Infosys and TCS. These are companies with virtually nil debt and have been some of the best value creators over the last few years. Many multinationals with zero debt like Bosch, Siemens and Oracle have also done extremely well in the stock markets. Then there are companies in sectors like steel, infrastructure and real estate where the outperformance in the markets actually began after they started sizing down their debt. DLF is a good case in point. Obviously, what we understand theoretically about debt reducing cost of capital does not appear to be true when we see the practical side of it. So, why is there a dichotomy?

Understanding the reasons for this dichotomy..
There are some specific reasons why in the Indian context companies that operate with low debt or companies that reduce debt actually outperforms in the markets. Let us look at some key factors..

One of the reasons for this dichotomy stems from the overall economic situation of the economy. Normally, during high growth periods, debt positively impacts your shareholder returns. Take the case of the period from 2003 to 2007 in India when the economy was growing at over 10%. During this period, most of the companies in the realty, capital goods and telecom space outperformed as the growth generated ROE and that was more than sufficient to cover the cost of debt. The problem started post 2009 when growth could not keep pace and the mounting leverage started pinching.

There are wide sector variances in the usage of debt. For example companies in the software, pharma and FMCG sectors can easily manage with lower leverage. Their working capital cycles are good enough to take care of their funding gaps. It is only in sectors like steel, power and telecom that the capital needs cannot be met through equity and hence one has to rely on debt. This is connected to the previous point since higher debt when accompanied with a negative growth cycle tends to have a negative impact on the solvency of the companies.

That brings us to the third issue of solvency vulnerability. A classic case is the Jaypee group. First, the debt of Rs.75,000 crore just could not be serviced with a group having a market capitalization of less than Rs.10,000 crore. That has pushed these companies to sell off most of their core productive assets. Effectively, once the debt has been repaid, what remains is just a shell company since most of the profitable business lines have already been sold to defray the debt. More often than not, solvency vulnerability becomes the major issue for debt laden companies.

When it comes to debt, there is the principal of anomalous approvals that tends to apply. What it means is that credit is normally available when you least need it and it becomes really tight when you desperately need credit. This tends to exacerbate the financial health of companies that are deep in debt and that also plays a role in destroying shareholder value.

Bad managerial decisions also play a part here. For example, the logic of debt reducing your overall cost of capital is applicable in normal circumstances when managers choose rationally. Normally, managers tend to add on debt when it is easily available and easy money encourages huge capital outlays. We have seen that in the M&A binges by Indian companies in the 2006-2008 periods as also in US shale recently. This leads to sub-optimal decisions, which actually results in debt destroying shareholder value.

To cut a long story short, our inferences are largely determined by our experiences in the last 10 years. During this period, we have seen highly indebted companies paying the price of indulging in an investment binge supported by easy debt. As GD growth picks up steam in the coming years, debt may not be a four-letter world after all!