Open an Account
The Difference between Block Deals and Bulk Deals 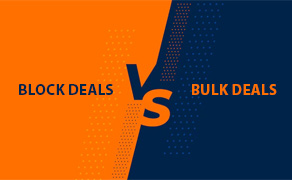 Various participants engage in trading and investing in the share market today. Furthermore, a number of strategies are employed while trading shares and orders are placed continuously. Apart from the very common retail investor, large corporations and institutions like hedge funds, mutual funds, investment banks, pension funds HNIs (high net-worth individuals), FIIs (foreign institutional investors), and company promoters also partake in the transactions that make up the buying and selling of shares on a large scale.

These big participants come to the share market with deep pockets, plus a solid knowledge of the companies they wish to invest in. The retail investor, small in comparison to these biggies in the market, is not privy to this special knowledge that large investors are party to. As a result of this, in the stock market today, the patterns of trading and investing of large investors are different from those of retail investors. Large deals, called bulk deals and block deals are what these big investors are involved in. They may sound the same, but there are differences you must be aware of. You should also note that any large investor, like a retail investor, has to open a demat account to engage in any deals in the stock market.

To be knowledgeable about the differences between the concepts of block deals and bulk deals, you have to understand each of these and what they entail. First, it is important to grasp the nature of a block deal. Defined as a single trade within which shares above the quantity  of 5,00,000 are traded, block deals are also those deals in which the value traded exceeds Rs. 10 crore. SEBI, or the Securities and Exchange Board of India, changed the criteria of value of a block deal from Rs. crore to Rs. 10 crore in 2017. In the share market today, block deals take place during a specific trading window - the block deal window. Due to the fact that block deals occur in a trading window that in special, they cannot be viewed by retail investors. These deals are not displayed on any trading platform’s value charts either.

You may think that subscribing to any upcoming IPO is very similar to a block deal, but this is not the case since the shares bought in terms of quantity and value differ immensely. Anyway, here are some aspects of block deals, and these will shed some light on the differences between block and bulk deals:

Bulk deals are those in which at least 0.5% of the total of listed shares of a company are transacted. Contrasting with block deals, bulk deals, in the stock market today, take place within regular trading hours. Again, unlike their block deal counterparts, bulk deal details are not hidden from other market participants like retail investors. They are displayed on the volume charts of different trading platforms. For the simple reason that bulk deals show up to other market participants, they have the power to influence stock prices in a dynamic way, in real time. The broker conducting any given bulk deal on behalf of investors has the responsibility to inform bourses regarding details of the deal, like the participants’ identities, amounts of deals, etc.

In other differences between block and bulk deals, bulk deals may be undertaken in the trading window of block deals if it meets the conditions for block trading. For example, if the transaction value is in excess of 0.5% of all the listed shares of the company, and is in excess of Rs. 10 crore, participants are free to have options of trading within the block window or the regular trading day. In the event the participants wish deal details to remain private till disclosed to exchanges, they can opt for the option to conduct the deal in the trading window.

Any large deals in the share market today obviously have an impact on other small investors (and some large ones). They draw attention because of their extent and degree as investors believe the stocks on such transactions must be credible. In whatever way bulk deals and block deals may be indicative of growing interest, or interest waning, in a certain stock, signals must be processed with care. Moreover, you should look at other indicators/trends before you arrive at a decision to trade. Just because a bulk order is executed, doesn’t mean that a specific stock will be likely to sway in the bulk trade direction. Nonetheless, repetitive bulk deals in a specific direction (whether buy or sell) may imply stock interest towards the bulk trade direction.

As a retail investor, you may have to carry out smaller transactions in terms of purchasing or selling stocks with the help of a trading account linked to a demat account. When you open a demat account, you probably never imagine that block deals and bulk deals could be as large as they often are in the markets. However, these deals, used by large funds, HNIs, and institutional investors, transact huge volumes in the share market today. Each one has its distinctive set of highlights and advantages. Bulk deals, visible by everyone, are transacted within normal market hours. Block deals, transacted in particular trading windows, afford slightly more privacy to concerned parties. Still, bulk deals must be reported to the related exchanges at the close of the trading day (on the same day as the deal), and the information must be provided to the general public.

When you invest in any upcoming IPO, you do some research on the company you are subscribing to for shares. The data on bulk and block deals may be used to tell you more about companies in a similar fashion, as they imply a large degree of corporate interest in the specific movement of that trade. Nonetheless, this information must be used prudently.