How domestic factors influence the value of the Rupee 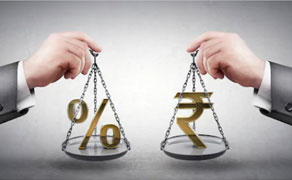 Like any currency, the Indian Rupee is also a reflection of the fundamental strength or otherwise of the Indian economy. Over a longer period of time, the INR has weakened against the US Dollar, but in the shorter term the INR is impacted by a lot of technical factors and demand/supply actors. Let us look at the 5-year chart of the Indian rupee vis-a-vis the US Dollar.

As the above chart indicates, the INR has depreciated against the dollar from a level of Rs.53/$ in late 2012 to a level of Rs.64.5/$ over the last five years. That is actually quite a calibrated move but within this five year time frame, there have been periods of extreme volatility. For example, between May 2013 and September 2013 the INR fell sharply from 54/$ to 66/$ as the US decision to taper its bond portfolio led to debt outflows to the tune of almost $12 billion. Since January 2017, the Rupee has appreciated sharply from a level of 68.5/$ to 63.5/$ as the US appeared to be veering towards a more benign monetary policy. So what are the key domestic factors that influence the value of the Rupee?

1.  Rate of retail inflation (CPI) in India
The understanding of inflation is the key to understanding the real effective exchange rate (REER). The REER is a barometer of whether the currency in question is overvalued or undervalued. While the actual calculation is quite complex, there is a very simple rule that needs to be understood. For example, if India’s rate of inflation is 6% and the US rate of inflation is 2%, then the Indian rupee must depreciate each year by around 4%. If it depreciates less that that then the rupee will be overvalued and if depreciates more than that then the rupee will be undervalued. For example if the INR has a REER of 117 then it means that the INR is overvalued to the extent of 17% vis-a-vis the US Dollar

2.  The real rate of interest in the economy
The understanding of the real rate of interest in the economy is an extension of the inflation concept. For example, if the 10-year G-Sec has a yield of 6.5% and if the inflation is at an average of 2% then the real interest rate is 4.5%. Normally, there is a positive relationship between the real interest rates and the INR value. That is why it is seen that whenever the RBI hikes rates, the INR actually sees an appreciation in value because the higher rates of interest would have increased the real rates of interest proportionately. There is also another portfolio angle to this. When real interest rates are high, we see more flows into debt from Foreign Portfolio Investors (FPIs). As more dollars flow in, the additional supply of dollars in the market tends to make the INR stronger.

3.  Seasonal dollar demand from importers and banks
Normally, importers and foreign currency borrowers have seasonal dollar requirements for payouts to foreign parties. For borrowers, there is the interest component on the bonds and the redemption of these bonds when they become due. In case of importers, there are regular remittances that have to be made against goods imported. Normally, when demand for dollars tends to get bunched together, we see pressure on the INR and a weakening of the rupee. Normally, the demand for dollars also tends to shoot up when the currency markets become very volatile. At that time, importers and banks tend to rush to hedge their positions and this demand tends to push up the forward premiums and leads to a depreciation of the INR.

4.  Fundamental fiscal and trade related factors
Trade and fiscal related factors are more long term in nature. Economies that tend to see consistently elevated levels of trade deficit tend to have a weaker currency. India runs a monthly trade deficit of $12 billion or approximately $150 billion per year. Currently, the annual import bill is close to around $420 billion. An important factor that determines the rupee strength is how many months of forex cover the RBI has. For example, the forex chest is at $390 billion, which is sufficient to cover 11 months of imports. This is considered a comfortable situation by global standards. If this ratio falls to around 9-10 months, then the INR tends to depreciate. On the deficit front, the ability of the current government to keep fiscal deficit at around 3% of GDP is a major positive for the INR.

5.  Government intervention still plays a key role in the value of the rupee
The INR, while not exactly convertible, is not subjected to government intervention in a big way. But the RBI does make an effort to maintain the INR in a tight trading range so that importers and exporters are not subjected to shocks. For example, if the RBI defines its range as 64-66/$, then the RBI will start selling dollars around 66 levels and start buying dollars around the 64 levels. Currently, the RBI not only directly intervenes in the currency spot markets but also hedges its exposures through the currency derivatives market. It is only in times of extreme volatility or in the event of a global crisis that the RBI intervenes in a big way in the INR market.

The value of the INR is a combination of a plethora of factors. Domestic factors play a key role in determining the value of the rupee. But a lot also depends on what happens outside India, something that is not entirely in the control of the RBI!