Impact of GST on the Indian Economy 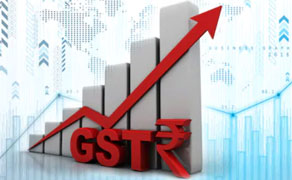 The big concern for any Indian family is how the monthly family budget gets managed in the light of the GST. When such a wide-ranging reform measure is announced it is definitely going to hit your daily expenses in some way or the other. Here are the implications of the GST implementation on 10 such items of daily use for an Indian family

1.  Mobiles will get cheaper, but mobile bills will get costlier. The average tax imposition on mobile phones is currently at around 14-15%. In the post GST scenario, this rate will come down to 12% bracket. However, mobile bills attract service and that will now be payable at a higher rate. Against the 15% service tax that your mobile phone company was charging you, it will be charging you 18% GST under the extant rates. Thus households will be able to buy smart phones at lower prices but the mobile bills are likely to go up.

2.  Your monthly clothing bill will come down sharply. This will be a double benefit for households. For example, the premium branded clothing that used to attract 24% tax in the previous regime will now attract only 18% GST. In case of cheaper clothing below Rs.1000, the GST will be still lower at just 12%. A similar principle will also apply in case of footwear too.

3.  Your medicines will get more expensive under GST. Most medicines attract GST at 18% and that is higher than the extant rates in most cases. However, the NPPA has already fixed ceilings for most drugs to avoid any sharp price increases. The net impact on medicine prices after considering the input tax credit (ITC) will be just a little over 1%, which the companies will be able to absorb. The bottom-line is that medicines should see a neutral impact due to GST.

4.  FMCG products of daily use will become cheaper. The GST Council has made a distinction between toiletries of daily use and for occasional use. Items like toothpaste, tooth powder, detergents and hair oil have been kept at a lower bracket compared to other FMCG products. This will help bring down your monthly budget as these items account for a good chunk of your budget.

5.  Food products will become cheaper under GST. In order to keep inflation in check, the GST Council has taken a conscious decision to keep rates of GST on food products at either 0% or 5%. The net positive impact should be evident in the monthly food budgets of most families. In fact, it could also impel households in India to move up the nutritional value chain due to lower food prices, which may be a positive.

6.  You can go ahead with your plan to purchase your motorcycle or car as prices have already been slashed in case of many brands. The overall GST impact will be around 28% for these products, which is lower than the combined impact currently. Of course, your fuel bill will not be impacted as it remains outside the ambit of GST, at least for now.

7.  If your household items are likely to get predominantly cheaper, then your monthly entertainment bill is likely to get steeper. Surprisingly, the GST Council has classified movie tickets along with sin products and gambling activities in the highest bracket, which may be a tad unfair. But the big catch is that states are allowed to levy additional taxes and we have seen the chaos created in Tamil Nadu with the state imposing an additional 30% state tax on movies on top of the GST.

9.  Travelling on a holiday will actually get a little cheaper. Economy class air fares will not attract tax of only 5% and that will allow airline companies to pass on these benefits in the form of lower air fares. Even rail fares in the sleeper and the air-conditioned class is likely to get cheaper under the GST regime.

10.  Finally, you will end up paying more for saving and financial planning. Sounds ironic, but that is true. As an investor you were paying service tax on your equity brokerage for investing in stocks and on insurance term policies. With the 15% service tax subsuming into 18% GST, you will need to tweak your long term calculations slightly to provide for higher costs of transaction. Of course, for long term investors with the intention of wealth creation, this may not make any substantive difference.

Prima facie, the benefits appear to outweigh the additional costs for the household budget. In fact, if the netting benefits of ITC are also considered, the actual benefit should be much bigger. That may be the good news for households from the GST Bill.