Performance of FMCG Companies in India 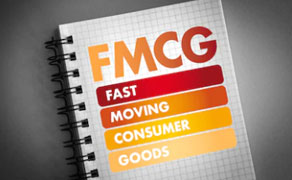 The fast moving consumer goods (FMCG) space has been out of action for a long time in the stock markets. Over the last two years the Indian stock markets have been dominated by stocks from the pharma and IT sector initially. With both these sectors going out of favour on US regulatory concerns, the action has shifted in the last one year to sectors like automobiles, banking and capital goods. But in the entire churn, the one sector that has been extremely quiet has been FMCG. However, al that could be changing; at least that is what appears to be the case..

In the above chart, the Nifty and the FMCG Index have been plotted to the base of 100 to make them comparable. While the FMCG was almost at par with the Nifty for a better part of the year, it has clearly outperformed the Nifty over the last 2-3 months. Whether this trend is sustainable or not is hard to say, but the question is whether there is something that is fundamentally changing to put the FMCG sector in a sweet spot. Here are some of the key factors..

Good growth in volumes and realizations..
The common refrain is that FMCG stocks quote at above 30 times P/E, but that is off the point. What matters is that the volume growth in FMCG companies appears to be back. FMCG now looks to sustain about 7% volume growth and 5% realization growth consistently year on year. That is good enough to sustain OPMs at current levels and ensure that net profits grow at around 20% on an annualized basis. There has been a sharp turnaround in volume growth which has again picked up steam from as low as 4% a few quarters back. This volume growth could be one of the core reasons supporting the enhanced performance of FMCG stocks.

End of demonetization woes for FMCG..
One of the sectors where the demonetization exercise took its toll was in FMCG. With nearly half of its incremental demand coming from rural and semi-urban areas, these were the worst hit by the demonetization exercise. A liquidity crunch in these non-urban centres and delays in realization meant that FMCG companies saw a genuine contraction in demand. That appears to be changing as the quarterly of the March quarter shows. With nearly 85% of the demonetized currency back in circulation, liquidity is no longer an issue. That has also meant that volume growth has regained momentum, something that was a major challenge a couple of quarters back.

No more internecine competitive wars..
What we get to see in telecom industry today is what was visible in the FMCG sector about 10 years back. For example, there was a clear pricing battle between Hindustan Unilever and Procter & Gamble in the detergents space and at the end of the day; neither could really gain much additional share in the market. Fortunately, both the FMCG companies have given up that strategy and it looks unlikely to be repeated. More so, with HUVR’s parent, Unilever, insisting on the Indian subsidiary improving its net margins, we are unlikely to see price wars in this space. That should be positive for FMCG.

A sharp fall in agricultural commodities..
Most of the FMCG companies in the Indian markets also have a major exposure to the processed foods space. Over the last one year, the price of most of the agricultural inputs that go into processed foods like flour, edible oil, pulses, cereals have all gone down sharply due to a glut of supply in the agri market. That has led to reduction in input costs for these FMCG companies. FMCG is also a very inflation-sensitive sector as it has to do with purchasing power of people. With the retail inflation consistently below 3% and crude oil prices below $50/bbl, the benefits of low inflation is getting transmitted into better economics for FMCG companies.

There is a big rural market and rising purchasing power..
Over the last couple of years, there have been a few key measures that are likely to lead to a quantum shift in the demand for FMCG products. The 7CPC and the OROP will put more money in the hands of people who are more likely to have a higher propensity to consume. The government, in its last two budgets, has focused on rural infrastructure and improvements in rural income levels. Both these factors have a multiplier effect on rural and semi-urban demand for FMCG products. The markets are currently betting that this could be a game-changer for the FMCG companies.

Finally, GST has been quite benign and favourable for FMCG companies..
A big positive for the FMCG companies was when the GST rates were announced. Firstly, the GST on most food inputs has been kept in the range of 0-5%. That will keep input cost escalation in check. Secondly, within the toiletries space the GST Council has given preferential treatment for products of daily use like toothpaste and hair oil to encourage consumption. Both these factors will spur demand for FMCG products.

But the biggest advantage for FMCG companies from GST could be a lot more structural in nature. Currently, every FMCG company designs its logistics, warehousing and distribution infrastructure based on the state level taxes. With GST taking India towards one-India one-tax, this should no longer be the issue. FMCG companies can now ensure that their logistics and distribution infrastructure is more optimal from a business point of view rather than a regulatory point of view. That could be the big structural boost for FMCG companies from the GST implementation!