10 ways to change your market outlook for next Samvat Year 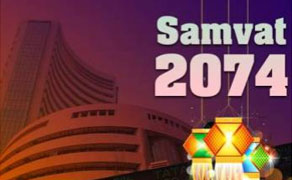 As a new Samvat Year 2074 dawns, it is time for us to take a fresh view for the New Year. Let us not forget that we are starting off the new Samvat at near an all-time high. Therefore the strategy for the next year cannot be the same as that adopted in the previous years. Here are 10 ideas for you to tweak your investment approach and market outlook in the new Samvat Year.

How to approach the stock market in the New Samvat

Get prepared for outperformance from a handful of stocks. This is normal when share market is at a new high If you look at the journey of the Nifty from 9500 to 10,200, the journey has been largely facilitated by Reliance Industries and a handful of private banks. Interestingly, the Bank Nifty which constitutes 30% of the overall Nifty has been lacklustre due to contrarian forces pulling at each other. This trend is likely to continue in the new Samvat with action concentrated in a few stocks only.

Volatility will be the name of the game in the new order. You can expect bouts of volatility as the markets react sharply to domestic and international cues. At higher levels markets by default appear to be vulnerable to news and we could see this manifest in a variety of forms in the next few months.

The logical cue from volatility is that a phased approach will work better in case you are a buyer. Of course, it is hard to catch the bottom and that should never be your focus as an investor. But by adopting a phased approach you will be make the best of the bouts of volatility and reduce your average cost of acquisition. This will improve your alpha.

Cyclicals may continue to outperform, especially those from the metals and alloys sector. This sector is largely dependent on the prices of key metals and alloys on the London Metal Exchange. We have seen these prices on the LME stay buoyant as Chinese demand has been picking up on the back of a robust Chinese economy. This trend appears set to continue for a few more quarters and this year could once again belong to these commodities.

The big outperformance will still come from the mid cap and small cap stocks. Of course, there will be the challenge of separating the wheat from the chaff, but it will be worth the while. With focused business models, the ability to transform into large caps, low capital bases and low levels of debit it will mean that mid-caps will be in a better position to outperform the market as a whole. For investors, this is where the alpha will be available for the third consecutive year.

The coming Samvat year could be the year of the return of the defensives. We have seen some green-shoots of outperformance from the FMCG space but that could get accentuated. As the GST stabilizes and the real benefits in terms of lower logistics costs starts trickling in, FMCG stocks could actually see a pick-up in investor interest. Demand factors are also likely to play a role. Secondly, pharma could be another sector that could see a turnaround in market fortunes in the new Samvat after nearly 3 years of quiescence and underperformance.

At a macro level we expect the inflation to remain subdued around the 3-4% mark. There may be some pressure due to a shortage of food production, but that should be managed through adjustments to the import basket. Interest rates will be more dependent on the need to sustain capital flows and the outlook that other central banks around the world indicate. The tapering of the bond portfolios will also have an impact on the interest rate decision.

Gold will be back in the reckoning in the coming year. We have seen gold prices in a range over the last 2 years after the quick rally in the early part of 2016. As geopolitical tensions build up around the globe and central banks create more volatility through policy divergence, gold may emerge as a safe haven asset to allocate some portion of your assets. While Indian households are adequately exposed to gold, we may see gold emerging as a serious investment option.

Rural spending could be the big theme in the coming year. This could impact a variety of industries ranging from NBFCS to MFIs to agri- input companies to FMCGs and two-wheelers. All these segments could see a demand boost coming from rural areas. One reason will be the income and wealth effect in rural areas. The second reason will be that, with just 18 months to go for the next general elections, the government is likely to tilt in favour of rural sops and giveaways, which is quite normal around the elections. All these will have a rural income effect.

In some ways, the coming year is likely to be a reiteration of the previous year and in some ways it is likely to be different. The reason it is significant is that we are starting off the new Samvat on a new high. That could be the difference.