How to make the power of compounding work for you? - Motilal Oswal
Open an Account

How to make the power of compounding work for you? 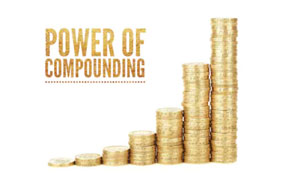 Understanding power of compounding with the case of Naren and Viren
We start with the story of 2 friends Naren and Viren who started out on their careers at around the same time. Both were roughly the same age and with their similar qualifications and skills were both earning a hefty take-home package. It was around this time that a mutual fund advisor approached Naren and Viren to start investing in mutual funds. His argument was that if they started early, the power of compounding will work in their favour. While Naren being from a conservative family decided to start saving right away, Viren had other thoughts. "At a young age money is meant to be spent. As our income levels grow, we can always save and invest later", was Viren's popular refrain. So while Naren immediately started off with a monthly SIP of Rs.10,000/-, Viren had other plans. His idea was to start later than Naren but increase his investment quantum. And that is exactly what they did as the table below captures…

Then, does Viren really have to worry?
Actually Viren had a lot worry. While Naren started his MF investment at the age of 25, Viren started investing in mutual funds only at the age of 35. However, he decided to make up for it by doing a SIP for double the amount. Viren's argument was that by doing so he would be at par with Naren by the age of 45. While Viren's was technically correct, he was in for a huge disappointment at the age of 45. While Naren's mutual fund corpus had grown to a formidable Rs.1.52 crore, Viren's corpus was around 1/3rd of that at Rs.55.73 lakhs. Viren was actually at a loss to understand why this had happened. Over the last 10 years he had invested the same amount as Naren had invested in the last 20 years. Both had invested n a fund yielding 15% per annum. Then what explains this huge divergence?

Blame it on the power of compounding
What Viren missed out was that by starting his investment 10 years late, he had lost out big time to Naren. All the returns that Naren earned in the early years were being consistently compounded and Naren had already built up a sizable corpus of Rs.28 lakhs by the time Viren had started investing. With that kind of advantage, the power of compounding was always going to work in favour of Naren, irrespective of the amount invested by Viren. In fact, Viren would have had to invest Rs.40,000/- per month over 10 years to reach the same level as Naren at the age of 45.

How to make the power of compounding work for you?

Start investment early. The earlier you start, the longer you earn returns and the longer your returns earn additional returns. Even if you start small it is ok. Starting at an early age is what is more important!

Ensure that you are in equity-related risk assets. How much ever regularly you invest in debt funds, there is a limit to how much wealth you can grow during your life time. It is only equities that give you the full benefit of compounding and create wealth over the long term.

Don't disturb the flow of your wealth accumulation. Power of compounding works best when you do not indulge in intermittent withdrawals. That will defeat the entire purpose of building wealth over the longer term. Resist the temptation to treat your mutual fund SIP like your bank ATM.

Constantly benchmark your investment performance with the benchmark index. Occasional under performance is understandable. However, if you are consistently under performing the index over a longer period of time, then power of compounding is unlikely to work in your favour. It is time for a switch!