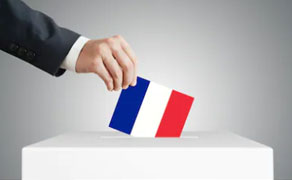 The French elections that are currently underway have opened up the possibility of a prolonged period of uncertainty for the global markets. Not surprisingly, the global currency markets as well as the equity and bond markets have been quite jittery. With a centrist Emmanuel Macron and an extreme right Marine Le Pen left in the final fray, it will be a choice between continuity and disruption as far as the French voters are concerned.

The bigger question is what will be the implications for the world economy in general and Indian markets in particular. Let us understand the basic differences in approach between the two candidates who will face off for the French Presidency. While Macron is more in favour of status quo on most French policies and is seen as pro-business, Marine Le Pen is seen as more popular and is more pro-worker. Macron is more in favour moving jobs out of France on business considerations Le Pen has a Trump esque obsession with keeping French jobs domestically. Thirdly, Macron favours a united Europe and continuation of the EU and the Euro while Le Pen is firmly opposed to it. Lastly, Macron is likely to be more liberal on the subject of immigration but Le Pen is likely to use the threat of Islamic terrorism to come down heavily on immigration..

Marine Le Pen has promised to revisit the idea of the EU and the common currency if she is elected to presidency. Among the French workers and the common people, there is a groundswell of opposition towards the common market. The idea of the common market has led to seamless transfer of jobs from France to Eastern Europe, where labour is much cheaper. French workers have had to pay a heavy price for this. Secondly, the general feeling in France is that the benefits of the Euro have accrued more to Germany and the wealthy economies of Northern Europe rather to the countries like France. Although, France had been one of the original creators of the Euro, Le Pen may be inclined to reconsider France’s continuation in the Euro.

The worry is that it may spread across the Euro zone..

France is not just any other economy in Europe as it is the second largest economy after Germany in terms of GDP. Also, France has been one of the original founders of the common market and therefore Len Pen’s decision to give up on the EU will mean a large number of other countries following suit. Already Greece has seen the rise of Alexis Tsipras while Spain, Portugal and Ireland have also seen been seeing demands for separating their currency from the Euro. These are the countries that are the most vulnerable to economic shocks. If Le Pen triggers the process of moving out of the EU then many more countries like Spain, Italy, Portugal and Ireland may follow suit. That would be quite chaotic for the EU as well as for the common currency.

What India needs to worry about?

The EU region has been a key trading partner for India and India may have to rethink its trade strategy with Europe if Le Pen is elected to power. We have already seen UK moving out of the EU leading to trade confusion. That problem could get much graver if France was to initiate a similar process.

Currency could be the major question mark. If Le Pen gets elected, then the Euro will come under severe pressure. That will typically lead to a strengthening of the dollar and the INR may have to pay the price of that. We could actually see the INR weakening if the dollar strengthens versus the Euro.

The big worry with Le Pen coming to power in France is the contagion effect. Already Germany and Netherlands are seeing the rise of the far-right. As we have seen in the case of Trump, far right policies tend to be more inward looking and isolationist. That could have larger implications for Indian corporates with business interests in Europe as well as overall trade with Europe.

There is the big threat of risk-off trade returning to global markets. If the French decision to leave the Euro gets triggered, then global currency markets may become volatile. Most FPIs would then prefer the safe risk-off trade and that will mean outflows from EMs like India.

The days ahead could be quite interesting. From a business perspective, the election of Macron will be favouring status quo. In the absence of better solutions, status quo is always a better answer. On the other hand, Le Pen could trigger a round of disruption in financial and currency markets across the world. India is unlikely to be spared. That is something India needs to watch out for. French elections may be a lot more critical to Indian business and for capital flows than we can imagine.