Open an Account
Most Trading Currencies in the World | Motilal Oswal

Trading Currencies in the World 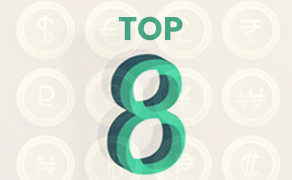 Frequently billed as a “banker’s game”, the foreign exchange markets, or forex, lets you trade currencies which can be a good way to diversify your portfolio. This is especially if your portfolio has hit a rut of sorts. The forex markets provide a multitude of opportunities when the other international markets are in doldrums. What’s more, forex trading online has become as easy as pie, and novices and seasoned players alike are engaged in active trading today.

Before you opt for any kind of investing, whether it's in forex or equities, you should ideally gain some awareness about forex itself, and the basics behind it. As a trader and investor, knowledge is the key that opens the door of rewarding investing and good profits in the future. Hence, here are eight currencies that all traders must know about, and their respective countries’ central banks.

No forex trader has gone into forex online trading without venturing into the area of the USD, the US dollar. The central bank of the USD is the Federal Reserve. It was created in 1913 by way of the Federal Reserve Act, part of the Federal Reserve System (the Fed). Commonly referred to as the “greenback”, the USD is the “home denomination” of the largest economy in the world, the United States of America. As is the case with all currencies, the USD gets support from economic fundamentals like the GDP (gross domestic product), and employment and manufacturing reports.

Nonetheless, if you are an online trader and engaged in online forex trading, you should know that the US dollar is greatly influenced by the central bank, as well as any announcements to do with the policy on interest rates. The most important aspect of the USD is that it acts as a benchmark for trading against other major world currencies, such as the Japanese yen, the British pound and the euro.

The EUR, or euro, is governed by the European Central Bank. The EUR is used by nineteen European countries who are part of the eurozone. The Euro is often referred to as the nemesis of the USD. Against the USD, the EUR is prone to be a slower mover, compared to the British pound or Australian dollar. In any average trading day, the base currency trades at 70 - 80 percentages in point (pips), with volatility at about 100 pips on a day. A trading consideration while dealing with the EUR is the time factor. The forex market is open twenty-four seven and traders are required to strategically plan FX (forex) trading routines. If you are trading with EUR-based currency pairs, you have to consider the overlap of US and Britain sessions, occurring from 8 am through to noon eastern standard time.

The JPY, or the Japanese yen, is governed by the Bank of Japan, and is the currency of the third-largest economy worldwide. Any investor engaged in forex trading online knows that the JPY trades within the identity of a component known as “carry-trade”. The JPY offers a low rate of interest and it is pitted against currencies that have a higher yield. These are the British pound, the New Zealand dollar and the Australian dollar. Consequently, the underlying is prone to being erratic, compelling forex traders to consider technical aspects for the long term.

The Bank of England governs the policies around the GBP, the British Pound. When you are trading with currencies, you do not have to open a demat account, as currencies that you earn as profit can go into your bank account directly. The asset is the currency itself, and the British pound, although more volatile than the euro, can get you some great returns. Frequently called the pound sterling and the cable, it is prone to trade in a wider range in the daytime. With swings of 100 -150 pips, you can also see the GBP trade at a narrow 20 pips. Notably, global online forex trading focuses on pairs like the British pound/Swiss franc and the British pound/Japanese yen, so you can see the currency being most volatile through US and British trading sessions. During Asian hours of trading, there is a minimum degree of volatility.

Known to be a “banker’s currency”, the CHF or Swiss franc, is governed by the Swiss National Bank. The Swiss franc and the euro have an intriguing relationship that must be mentioned. Resembling the euro, the Swiss franc makes hardly any crucial movements in any individual trading sessions. Consequently, traders should be on the look out for this currency to trade in the daily average range of around 45 pips on a day. The British trading session tends to experience the highest volume of trading with the Swiss franc.

If you are a keen player in forex trading online, you will know a thing or two about the CAD or the Canadian dollar. The Bank of Canada serves as its governing entity. The CAD, fondly called the “loonie”, is prone to trading like other currencies in the area of 50 -100 pips on a daily basis. A distinct characteristic of the CAD is its link with crude oil. Canada is a primary exporter of the commodity, as a result of which, several investors and traders use the CAD to hedge existing commodity positions. Also, the CAD value can be tracked by tracing signals in the market of crude oil.

7. The New Zealand and Australian Dollars - Both Carry Favourites

The Central Bank of New Zealand and the Reserve Bank of Australia are the governing bodies of these two currencies, respectively. The NZD (New Zealand dollar) and the AUD (Australian dollar) have targeted carry traders, as both provide the highest yields out of all the major currencies. As a result of this, there is volatility experienced in these pairs in case of a deleveraging effect. It is noteworthy that both these currencies maintain connections with commodities, mainly gold and silver.

Maintained by the auspices of the South African Reserve Bank, the South African Rand (ZAR) is a relatively volatile currency. The average range of trading on a daily basis sees this currency at thousands of pips. The daily range should not fool traders who are involved in online forex trading. When the average pips of the rand are compared to pips of the USD, the movements mimic those of the British pound’s daily average pips. Therefore, the rand is a good currency to pair with the USD, considering its carry ability.

Evolve with Your Investment

In India, the currency markets are still in the process of evolution as more and more traders explore them gradually. The currency markets do not require you to open a demat account and online trading is easy enough. To diversify your portfolio, currency markets can offer you a lot of value, and you can also explore an upcoming IPO for diversification.