Know How the New 500 Rupee Note Would Look Like 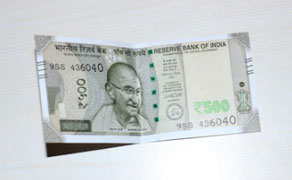 The move from the Indian Prime Minister to make the existing Rs. 500 currency notes as invalid was welcomed by many. The Reserve Bank of India has announced the issue of new Rs 500 denomination bank notes which are the Mahatma Gandhi Series that would have the insert letter “E” in both its number panels. The new currency note of Rs 500 will also have the signature of Dr Urjit R Patel, the Governor of Reserve Bank of India. The bank notes will also include “2016” as the year of printing and the “Swachh Bharat Logo” that is printed on the reverse side of the new currency.

The new Rs 500 notes will look quite different from the earlier 500 rupee banknote. The new notes differ in size, colour, theme, security features and many more. Some of the main features of this new Rs 500 bank note are:

The colour of the note is stone grey.

The banknote will also have the image of our country’s heritage site, Red Fort along with the Indian Flag on the back.

The Rs 500 banknote also has other features that include the print of the Mahatma Gandhi portrait, the emblem of Ashoka Pillar, the bleed lines and the circle with the Rs 500 mentioned in the right which also enables the visually impaired people to identify the bank note.

Let us now have a look at all the features of the new Rs 500 banknote.

The banknote has the see though register in the 500 denomination numeral.

The banknote also includes a latent image of the 500 denomination numeral.

The 500 denomination numeral is written on the note in Devnagari.

The orientation of the portrait of Mahatma Gandhi has been changed.

The windowed security thread on the note changes colour from green to blue when the bank note is tiled.

The bank note has the Governor's signature, the Guarantee clause and the emblem of RBI on the right side.

The note also has the Portrait and the electrotype watermarks.

The new Rs 500 note has the number panel with the mentioned numerical growing from small to big, and is located on the top left and bottom right sides.

The denomination that is mentioned along with the rupee symbol also changes the colour from green to blue and is on the bottom right of the note.

It has the emblem of Ashoka pillar on the right.

Features for the visually impaired

The bank note has a circle with Rs. 500 printed in raised print and is located on the right.

The bleed lines on the note are present on the left and the right and are in raised print.