The demonetization impact on GDP may actually be beneficial.. 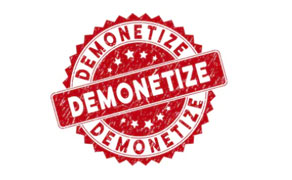 On November 08th 2016, when Prime Minister, Shri Narendra Modi, announced the demonetization of Rs.500 and Rs.1000 notes, it was met with mixed reactions. A full 10 months hence, the jury is still out on the merits and demerits of demonetization. To be honest, there have been a few challenges. Firstly, the demonetization itself created a major disruption with the vulnerable sections of the society being the worst hit. But election results subsequent to demonetization appear to indicate that people have welcomed the move.
Secondly, it has impacted the manufacturing sector which is wary about investing in inventories. This is evident from the weakening IIP and PMI numbers as well as the GDP number falling to just 5.7% in the first quarter ended June 2017. Thirdly, there has been some initial impact on sectors like two wheelers and entry level cars which represent rural demand. However, that has picked up in the months the remonetization process started. The good news is that while the disruptive impact of demonetization has been disruptive, the long term benefits are likely to outweigh these costs. Let us look at 5 such benefits of demonetization over the longer term and how it will more than compensate for the short term pain..

Greater shift towards digitization
You may not have realized this but the Kirana shop in your locality, which was always insisting on cash payments, has suddenly gone digital. Today in metropolitan cities and even smaller towns it is hard to find a retail outlet that does not accept digital money. It could be credit cards, debit cards or even UPI platforms like Paytm. The direct impact of this move has been that millions of people across India have become digital-ready. They may not be using digital platforms due to the costs entailed but that is a different story. When basic hygiene issues in online payments are addressed, India is surely poised for an explosion in digital payments. Remember, a digital payment means a better track of spending, a more reliable audit trail and less black money generation.

Greater tax compliance will follow logically..
According to statistics put out by the government of India, there has been a sharp increase in the number of people covered under the direct tax net. Of course, indirect tax net has widened due to the GST implementation but demonetization has forced more individuals to file their income tax returns. That is because income trails can be tracked down due to a combination of digital money usage and greater financial inclusion through Aadhar and Jan Dhan. This rectifies the long-standing anomaly wherein a country with a population of 125 crore had less than 1 crore income tax assessees.

Greater shift towards financial savings
The demonetization has actually dealt a blow to two asset classes that were traditional favourites of Indian households. Storing money in gold bars, ornaments, land parcels and benami properties is going to become increasingly difficult. With the trail of money being established clearly post-demonetization, Indians are going to rely less on asset classes like property and gold to store the wealth. Indians are discovering the virtues of equities and mutual funds as is evident from the surge in retail flows into equity mutual funds, especially via the SIP route. This is also a long term positive trend as it results in investors taking risks in equities over the long term. Remember, Americans created wealth through a wider equity cult and that may have been just about triggered off by the demonetization drive.

Positive impact on inflation and GDP
If you look at the inflation trend in the last 1 year, it has been on a consistent downtrend. Many analysts have blamed this on a liquidity crunch. That is not correct! What has actually happened is that either the cash that people had stashed has come into the banking mainstream or people have become more wary of using cash. This has made people largely wary of using cash and that has reduced rampant consumption and consequently the inflation level. In fact, demonetization has managed to negate the consumption impact of the huge OROP and 7CPC payouts last year which has also had a salutary impact on inflation. Sharp fall in inflation has reduced the real interest rates sharply and paved the way for the RBI to cut rates further paving the way for a push to IIP and GDP.
During the entire demonetization exercise, cash amounting to Rs.7 trillion was ploughed back into the banking system. Despite the RBI reissuing fresh notes to the tune of over 80% of the demonetized amount, the growth is not showing signs of picking. That is because weak GDP growth is more a function of weak demand and tepid capital investments and capacity creation. Demonetization has not had any impact on GDP, other than highlighting the more fundamental factors that are afflicting the Indian economy.
But the real booster could come when the combined benefits of demonetization start kicking in. A surge in bank deposits and lower rates will prepare banks for a surge in corporate credit which will have a salutary impact on GDP growth. As domestic financial savings improve, the government will have less of an incentive to depend on global hot money flows and hence strong rupee strategy may give way to a weak rupee strategy. That boost to exports will, perhaps, complete the process of boosting demand. That could be the biggest take-away from demonetization. And it will be positive!