What clues can we gather from the bulk deals reported? 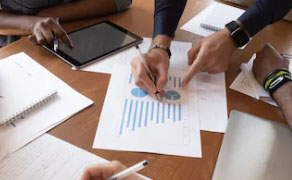 We have all heard of bulk deals in the equity markets. What does a bulk deal mean and what is the effect of bulk deals on share prices? An important question is how to know if the bulk deal is buy or sell deal since every transaction has two sides. A bulk deal does give us some important clues about the broad trends and the interest pockets in the equity market. Here is what you need to know about bulk deals. Remember, bulk deals are different from block deals, as we shall see in greater detail later in this piece.

Understanding bulk deals and block-deals..
A bulk deal is a deal where the total quantity of shares bought or sold is greater than 0.5% of the share capital of the company. A bulk deal can be transacted either through the normal trading window or through the block trading window. Quite often, when a large FII or mutual fund or an HNI wants to buy a large block of shares in a particular stock, they prefer to use sliced trades through the day. This ensures that they get the best advantage of the volatility in the market and are able to reduce their overall cost of acquisition. Similarly in case of bulk selling also, the sliced approach helps them get a better selling price. Bulk deals have to be reported to the exchange by the broker executing the trade. In case the bulk deal (exceeding 0.5% of the share capital) is executed through the block window then the trade has to be reported immediately to the exchange. In case of a sliced order through the day; if the total purchase or sale exceeds 0.5% of the share capital then the bulk deal has to be reported to the exchange within 1 hour of close of trade.

Block deals, on the other hand, are block execution of a minimum of 5 lakh shares or value of Rs.5 crore. The block deal window is open for a period of 35 minutes after trading opens and any block trading executing on this window has to be reported to the exchange immediately by the broker and such a trade cannot be squared off intraday. HNIs, FIIs and mutual funds use the block window to execute large trades without the markets getting a whiff of it or even impacting the price. That brings us back to the key question; what is the effect of a bulk deal on the share price. Here are 3 important takeaways..

1.  Bulk deals are indicative of concentration of interest..

This can be looked at as a signal of building interest in a particular stock. Normally, bulk deals tend to be indicative of a sudden spurt in interest from informed investors. If you take the directional bulk deals on the NSE and BSE over a period of time and see the impact on stock price, it is quite evident that where there is concentration of interest from informed institutions, there is a positive impact on prices. The reverse holds in case of consistent selling. A word of caution is warranted here. Many smart investors skirt the bulk deal reporting by executing slightly lower than the 0.5% mark. So don’t take the bulk deals data as entirely indicative.

2.  Separate the intraday trades and the bulk transfers..

Out of the bulk deals data, you need to separate the non-directional data. The first set of such data is the intraday trades’ data and the short term trade data. These are proprietary books and large investors just trying to ride onto a trend for short term profits. They do not indicate anything. The second set of such data is the bulk transfers among institutions. You get to see large positions in the bulk deals segment that is nothing but FIIs, MFs, large HNIs and promoters actually shifting ownership around. Thirdly, be cautious if the bulk deals are from arbitrage funds or if the bulk deals are backed by heavy shorting in futures. That is most likely an arbitrage position and not a directional indication.

3.  Focus on bulk deal trends over a period of time..

This is possibly the most important take-away from the bulk deals data. Ideally, take the consolidated bulk deals data for a period of 2 year and try to sort it based on the stock and the date. That will give you a clear idea of how the stock prices have moved in conjunction with the bulk deals. It will also give you an idea of which traders and investors are typically the most adept at catching on to trends as evidenced by future movement in prices. When you combine these factors, the bulk deals actually become meaningful and actionable from a stock selection perspective.

There is an important caveat here. Bulk deals only reveal part of the interest build-up in the stock and many times may not be indicative. But longer term bulk deals aggregation does give you important clues. But, at best these bulk deals can be a starting point for you. The onus is then on you to do your detailed study and homework before embarking on an investment decision. The moral of the story is that there is a lot of hidden wisdom in bulk deals; you just need to use it cautiously!