How to create a portfolio that works in Black Swan conditions 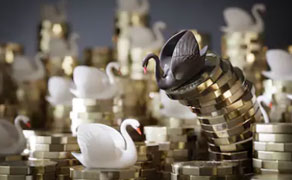 What do we understand by a Black Swan condition? As the name suggests, Black Swan is a rarest of events. Swans are normally white in colour and a Black Swan event is therefore used to represent an event that is extremely rare and therefore becomes unpredictable. The concept of the Black Swan was first popularized by celebrated author, Nassim Nicholas Taleb, in his highly popular book of the same name. The book also became immensely popular as the book coincided with the sub-prime crisis, which was a prime example of a Black Swan event for the stock market. Let us look at Black Swan investing and how to prepare for Black Swan events. What is a Black Swan Portfolio? But, first the curious case of John Paulson!

The curious case of John Paulson

John Paulson may have been unknown name in financial market circles till the mid-2000s. His biggest bet was against sub-prime mortgages starting 2005. While the sub-prime mortgage crisis started manifesting in the US around 2007, Paulson and his team had identified sub-prime as a source of risk nearly 2 years earlier. While that was an advantage, it also turned out to be a nightmarish experience for the Paulson Fund. The fund was short on sub-prime mortgages for nearly 2 years when the prices were still shooting up. When the financial crisis ultimately struck the US and the world in 2008, it led to nearly 50% of the world market cap getting destroyed but Paulson made nearly $10 billion, in what is now termed as the “Greatest Trade Ever”. So while the world flinched under the onslaught of a sub-prime crisis, John Paulson actually made his billions out of it.

The idea is not to be the next John Paulson because Black Swans are, by default, highly unpredictable and hence it is hard to create a business model around them. But here are five ways of getting around a potential Black Swan condition.

That may sound drab and boring but the best way to beat black swan events is by diversifying your risk. An investor long on equities would have seen tremendous value damage in 2008. But if the assets had been spread across equities, liquid assets and gold then the damage would have been much lower. Even in the worst of Black Swan situations, there are some asset classes that will certainly hold value. Diversification may not make money for you in Black Swan events but it will certainly protect your portfolio value.

It is technically wrong to say that Black Swan events are entirely unpredictable. One can argue that something like 9/11 was impossible to predict. But it had its real impact only on select industries like aviation. A diversified portfolio would have surely helped you in those conditions. Let us look at other Black Swan events in the last 30 years like Black Monday of 1987, the Sub-Prime crisis, Greek Crisis etc. None of these events were really unpredictable. In fact, most of the investors and traders know about the possibility of these occurrences intuitively. It is only the timing they were not sure of. With big data capabilities and the use of AI, it should be a lot simpler to fine tune and put a finger on such Black Swan events.

3.  Gold could be your saviour in Black Swan conditions

This is an extension of the diversification argument but gold deserves special mention in Black Swan times. For example, between 1971 and 1979 when the world was rocked by geopolitical crisis and the Arab oil embargo, gold prices appreciated nearly 2400%. Similarly, gold had a massive rally post 9/11 and also post the sub-prime crisis. The best asset class in Black Swan conditions could be gold as it holds value better in such conditions. After all, it is a real asset and not paper money.

4.  Hedging can be extremely useful in Black Swan conditions

This is a slight extension of the John Paulson argument and also about proactively reducing risk in such Black Swan conditions. We are not talking about taking a contrarian view to make big money. That is what John Paulson did in 2007 and George Soros did in 1992, when he bet against the UK£. The idea is to use contra strategies to hedge your risk of long positions. Buying stock puts or buying Nifty put options could be an answer when Black Swan events are likely. Of course, they entail a cost, but it is worth the while.