Is Motilal Oswal CDSL or NSDL 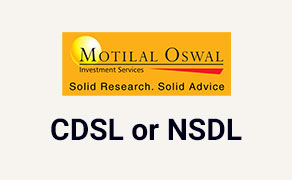 Now, demat accounts are offered by entities known as depositories. In India, we currently have two depositories - the Central Depository Services Limited (CDSL) and the National Securities Depository Limited (NSDL). Apart from these two entities no one else can offer a demat account in India.

So then, what about Motilal Oswal? Is Motilal Oswal CDSL or NSDL? If this is what you’re wondering right now, here’s something that can help clear things out.

With respect to the form and function of NSDL and CDSL demat accounts, there’s absolutely no difference between the two. They’re very similar to each other.

Also, the NSDL was the first-ever depository established in India in 1996, whereas the CDSL came into being only in 1999.

Apart from this trivial difference between NSDL and CDSL, they’re basically very similar in terms of functions. Want to open a demat account? Get in touch with Motilal Oswal right away. You can open one online using a paperless process within minutes.