What do Trump’s tax reforms mean for global commodities 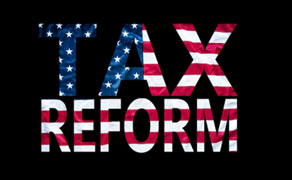 The tax reforms outlined by the Trump government may still be short on specifics. What is, however, clear is that the corporate tax rates may be eventually cut to 15%. In addition, the pass-through companies like partnerships and hedge funds that are currently paying 39.5% tax will be also required to pay only 15% tax. Broadly there are 5 announcements made by Donald Trump. For individuals there will be a simplification of tax brackets and doubling of the Standard Deduction. For corporates, there will be reduction in corporate tax rates, repeal of the alternate minimum tax (AMT) and the repeal of the inheritance tax. These five items put together will increase the US budget deficit by nearly $7.2 trillion. There will be a benefit of $2 trillion from the withdrawal of all exemptions other than mortgages. There will leave the US budget with a net deficit of $5.2 trillion as an outcome of the tax reforms.

It needs to be remembered, that the two cornerstones of Trump’s campaign were tax cuts and infrastructure spending. Going by initial announcements, Trump seems to have largely stood by his commitments on tax cuts. It can therefore be assumed that he will also stand by his commitment on infra push. The question then is what will be the implications of this move on global commodities. We focus on four key commodities here; Ferrous, Non-ferrous, oil and gold.

How the Trump plan will impact ferrous commodities
In terms of steel consumption, US may still not be even a patch on China. While China accounts for nearly 45% of global steel consumption, the US accounts for just about 7% of the global steel consumption. But that is more of static information. What matters is that for the month of March 2017 US steel production was 3.4% higher compared to the year ago period. Even world steel production was up by 4.6% in March 2017 at 145 million tonnes. The impact of improved demand is also visible in prices of Hot Rolled Coils (HRCs) which moved up by over 16% in 2016. The added boost could come from the Trump tax plan. Remember 70% of US steel consumption goes into the construction industry. Corporate tax cuts may trigger a construction boom in the US triggering off higher steel demand and prices. Similarly, if the $1 trillion infrastructure investment over 10 years also fructifies, the multiplier impact on steel could be huge. Steel could really be the one sector to benefit substantially from the tax plan; both in terms of demand and prices.

How the Trump plan will impact non-ferrous commodities


Source: IMF estimates
Broadly consisting of copper, aluminium and zinc; these non-ferrous commodities are essentially industrial inputs and their demand and price pattern are largely determined by industrial demand. In the first quarter of 2017, aluminium prices are already up by 13%, although zinc and copper have remained somewhat flat. As the chart above depicts, the US GDP growth is expected to pick up over the next two years. With lower corporate tax rates and a business-friendly economic policy from Trump, the industrial investments may be back. That will be positive for the demand and price performance of non-ferrous space in general. Outside the Trump plan, the real boost could come from China, which consumes 50% of all the non-ferrous metals produced in the world. The Trump tax plan and infra-spend could just provide the much needed alpha.

How will crude oil prices pan out?
The big supply boost in the last few months has come from US shale. In the light of the OPEC supply quotas, the price of Brent Crude had moved up from $44/bbl to closer to $55/bbl. This incidentally enabled many US shale companies to become viable. That has led to an increase in oil supply keeping any price rise in check. The sharp cuts in corporate tax rates could be a big boost for US oil companies and could incentivize them to invest further to prospect for more oil. At the same time, Trump himself is committed to expanding the land under shale prospecting substantially. That will mean a substantial expansion of shale supply from the US. The broad impact of Trump’s tax policy on oil prices could be negative as the excess supply could dampen oil prices.

Finally, how will gold react to the Trump tax plan?
Gold had an erratic run in the last couple of years. After touching a low of almost $1050/oz in the early part of 2016, gold prices rallied sharply to become the best performing asset class in the first half of 2016. However, with Donald Trump focusing on reviving growth, gold prices are likely to come under pressure. There are two basic reasons for the same. Firstly, a big thrust on tax cuts and growth will be accretive for industrial and GDP growth in the US. Normally, when growth comes back, it is equities that tend to benefit as an asset class. Since gold is typically a safe haven asset, it tends to underperform in times of buoyant economic growth. Secondly, gold is inversely related to the US Dollar. With growth returning to the US and a spending boom likely to be triggered, we could get to see a virtuous consumption and investment cycle in the US. That could end up making the dollar stronger and gold prices weaker.

To sum it up, the Trump tax plan is likely to be positive for ferrous and non-ferrous metal s betting on a revival in infrastructure and industrial growth. However, oil will have supply concerns and gold is likely to diverge downwards as the dollar strengthens upward. A lot will actually depend on how the tax plan is implemented in the US!