All you should know about Urjit Patel 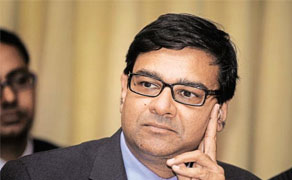 After the much-applauded Raghuram Rajan, the suspense over who’ll take over the reigns of the RBI governor was growing tense. And after several names being floated by the media, Urjit Patel was appointed the new RBI governor. He’s the first RBI Governor appointed by our Prime Minister, Mr. Narendra Modi and the 24th RBI Governor of India.
"The Appointments Committee of Cabinet has approved the appointment of Dr. Urjit R. Patel as Governor, Reserve Bank of India for a period of three years," said the statement from the government. Patel started his three-year term on Sept. 4th, 2016.

Patel’s career is a feat worthy of the position he currently holds. He served as the Chief Policy Officer at IDFC Limited from 1997-2006. He also served as a consultant to the Ministry of Power, Department of Economic Affairs, New Delhi from 1998 to 2001. He has also worked with the International Monetary Fund (IMF) between 1990 and 1995 covering the US, India, Bahamas and Myanmar desks. But his key
positions are

He headed a panel that advocated landmark changes to monetary policy in India, including a switch to inflation targeting and the formation of a panel to set interest rates. The six-member monetary policy committee will be made up of Patel and two other RBI officials, along with three members appointed by the government.

Patel has been equated with Rajan in his policies, which is presumed to be a message from the government that when it comes to monetary policies, the government believes in steadiness. Rajan was successful in slashing the interest rates to half and had also convinced the government to adopt inflation targeting, setting a medium term central target of 4 percent, within a range of 2 to 6 percent. Patel also endorses this policy. And likewise, he will now get to implement the policies Rajan had helped shape.

Patel beat former deputy governors Rakesh Mohan and Subir Gokarn and Arundhati Bhattacharya (Chairman, State Bank of India) to the job. Rajan, who succeeded in halving the inflation rate from the double-digit levels prevailing when he took over, also persuaded the government to adopt inflation targeting, setting a medium term central target of 4 percent, within a range of 2 to 6 percent - another policy endorsed by Patel.

The new governor is opposed by the same challenge – inflation. Consumer inflation accelerated to 6.07 percent in July. This is the fourth consecutive month that it has stayed above the RBI's near-term target of 5 percent by March. Along with controlling inflation, Patel will have to continue with the efforts to cleanup bad loans of banks so that they can once again support the investments required for India to stay steady or gallop ahead as one of the front runners of the world’s fastest growing economies.

Urjit R. Patel was born on October 28, 1963, in Kenya. His grandparents are from Gujarat. Patel has authored technical publications and papers in the areas of Indian macroeconomics, public finance, infrastructure, financial intermediation, international trade and economics of climate change.